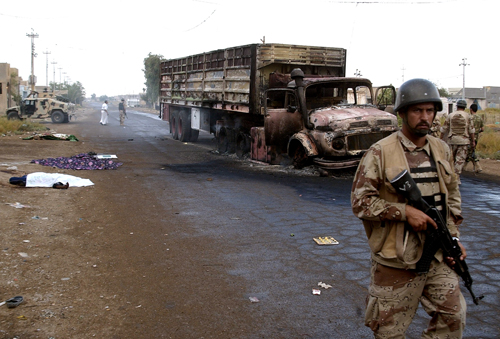 A series of bomb blasts went off in rapid succession in a shopping district in a main Christian neighborhood of Baghdad yesterday, killing 13 people and wounding 72, police said.
Other attacks around Iraq killed four others, and the U.S. military announced the death of a soldier in the north - the latest in what has been one of the bloodiest stretches of days for American troops this year.
At least 16 troops have been killed in combat since Saturday, including eight U.S. soldiers who died in gunbattles and bomb blasts Monday in Baghdad - the most killed in a single day in the capital since July 2005. The casualties come amid an intensified U.S.-Iraqi military sweep launched in Baghdad last month to clear neighborhoods house by house of weapons, militiamen and insurgents.
Despite the sweep, attacks have continued in the capital, a deadly combination of attacks by Sunni insurgents and tit-for-tat killings and bombings by Shiite militias and Sunni groups that have killed thousands this month.
Just before noon, a car bomb and two roadside bombs blew up in the span of 10 minutes in a shopping district of the Camp Sara neighborhood, which is predominantly Christian, 1st Lieutenant Ali Abbas said.
The blasts left nine dead and injured 71, including shoppers and 15 policemen, destroyed cars and collapsed part of a nearby building, he said.
Bodies lay in the street next to the smoking wreckage of burning cars.
Rescue workers piled corpses into an ambulance parked next to the crumbled facade of a building, while a policeman warned residents to leave the area for fear more bombs would explode.
An increasingly common insurgent tactic is to detonate one bomb to draw rescue workers and onlookers, then to explode a second device to cause mass casualties.
One witness, who identified himself only by his first name, Hamdi, said a roadside bomb went off first and people started to gather, then the second blast went off.
"More people gathered and they were searching for their dead or missing relatives when the car bomb exploded," he told Associated Press Television News at the scene. "Everybody knows this is a Christian neighborhood, they are neither Sunnis or Shiites, so why are they doing this them?"
Earlier in the nearby New Baghdad area, a bomb blast hit a convoy carrying the Iraqi industry minister. Three police guards were killed and nine others wounded, but the minister was not harmed, Abbas said.
Meanwhile in Baqouba, 60 kilometers northeast of Baghdad, gunmen attacked a police patrol, killing two policemen and injuring five people, Diyala province police said.