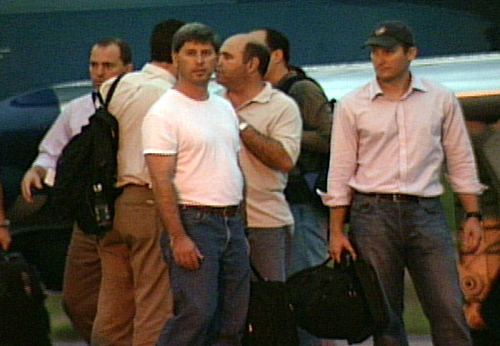 A Brazilian court ordered police to seize the passports of two U.S. pilots whose executive jet clipped a commercial plane in midair last week shortly before the larger aircraft crashed, killing all 155 people onboard, a spokeswoman said.
Meanwhile, a Brazilian newspaper reported on Tuesday that the Brazilian-made Legacy executive jet, which was carrying seven Americans, disobeyed an order by the control tower to descend to a lower altitude just before coming into contact with Gol airlines Flight 1907.The daily O Globo paper said the Legacy flew at 11,300 meters to the capital Brasilia, but then ignored an order to descend to 11,000 meters to continue its flight to the Amazon city of Manaus. The executive jet was damaged but landed safely at a nearby air force base.
A judge in Mato Grosso state, where the Gol plane crashed in the Amazon jungle, ordered police to seize the passports of Legacy pilot Joseph Lepore and co-pilot Jan Palladino "as a result of the doubts surrounding the case and the emergence of indications that the accident was caused by the Legacy," state Justice Department spokeswoman Maria Barbant said.
She said the two were not arrested but "just prevented from leaving the country, at least until we know exactly what happened."
Air force commander General Luis Carlos Bueno also said the Gol flight, a brand-new Boeing 737-800, had a flight plan for 11,300 meters and the Legacy jet was authorized to fly at 11,000 meters, according to an interview Tuesday with Brazil's government news service Agencia Brasil.
Christine Negroni, an investigator for the aviation law firm Kreindler & Kreindler of New York, said that under international guidelines, westbound planes are supposed to fly at even-numbered altitudes, and eastbound planes at odd-numbered altitudes, as measured in feet.