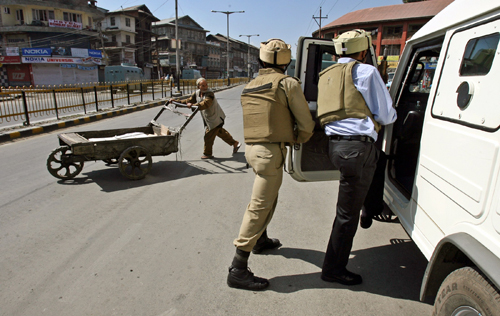 Security forces yesterday stormed a hotel from which suspected Islamic militants opened fire on a paramilitary base in the center of Indian Kashmir's main city. A policeman was killed in the raid.
At least two other people were seriously wounded in the ongoing operation, said Sanjiv Sharma, head of a paramilitary force that had gone into the building, ending a three-hour standoff.
In a separate incident in the village of Grend Nar, 80 kilometers south of Srinagar, the army killed at least two suspected militants who were hiding in the village, said army spokesman Colonel Hemant Juneja, adding that the gunbattle was still going on. No further information was immediately available.
In Srinagar, the tense standoff - punctuated by sporadic automatic gunfire and grenade blasts - was sparked when the gunmen opened fire from the building on a nearby paramilitary base, said Police Deputy Inspector General Farooq Ahmed.
"Our forces are clearing the hotel room by room," said Ahmed, who was coordinating the assault in central Srinagar. Intermittent gunfire could be heard as the forces went in to the building.
At least nine armored vehicles were parked outside the hotel and a dozen jeeps filled with soldiers pulled into the area and surrounded the hotel in the busy Lal Chowk in the heart of Srinagar.
Police cordoned off the area, trapping dozens of residents of nearby buildings in the busy Lal Chowk area of the city.
The manger of the Standard Hotel, the scene of the standoff, and another man were shot and wounded, said Manzoor Ahmed, a doctor at the local hospital. The manager, Abdul Rashid, was in a serious condition, he said.
Speaking to reporters after surgery to remove several bullets, Rashid said two heavily armed men had burst into his hotel and opened fire on a nearby policeman. The gunmen let him go but he was caught in the crossfire as he tried to flee, he said.
A Kashmiri militant group, Al-Mansorian, claimed responsibility for the attack. An unidentified man, claiming to be a spokesman for the group, told the local Central News Agency that three of its men carried out the attack.
Al-Mansorian is one of the smaller groups operating in the area.