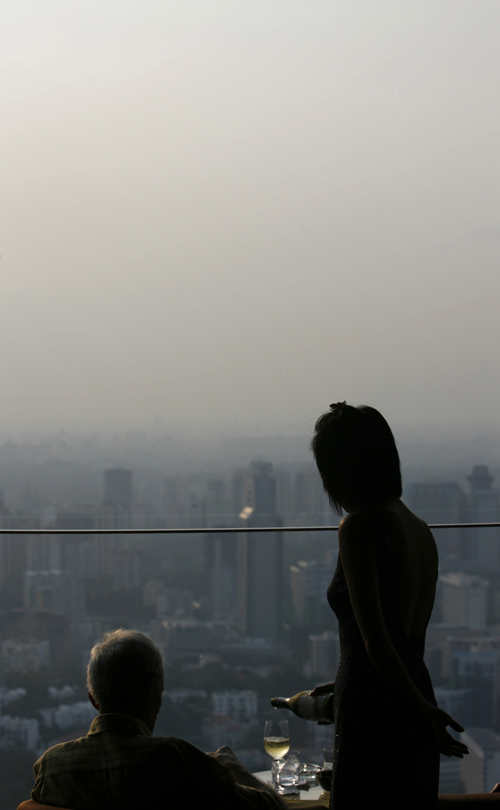 Smoke haze from forest fires in Indonesia blew across nearby Malaysia yesterday, as air quality fell to unhealthy levels in at least a dozen areas and visibility dropped sharply in Kuala Lumpur.
The Department of Environment's Web site said unhealthy air quality was reported across Malaysia's largest state, Sarawak, and at a major urban center in neighboring Sabah state, both on Borneo island.
Borneo, located east of mainland peninsular Malaysia, is shared by Indonesia, Malaysia and Brunei.
The haze is an annual occurrence caused by land-clearing fires in Indonesia, and sometimes in Malaysia. The fires are typically started by farmers clearing brush for plantations, often in Kalimantan province, the Indonesian part of Borneo.
"There were more than 424 hot spots in satellite images over Kalimantan," an officer at the Meteorological Department told The Associated Press. "There are a few, very few, fire spots in Sarawak, but the bulk of the fires are in Kalimantan, near Sarawak."
The official spoke on condition of anonymity because he was authorized to speak to the media.
In Kuala Lumpur, Malaysia's main city, smoky haze shrouded the landmark Petronas twin towers and other high-rise buildings despite steady rain as downtown visibility dropped to about a kilometer.
Kuala Lumpur's air pollutant or API index level was 77, short of the official "unhealthy" level of 100 that was breached in Seremban, the capital of Negeri Sembilan state with 107 and Nilai, an industrial town, with 109.
Both places are less than an hour's drive from Kuala Lumpur and the administrative capital, Putrajaya. The API level rose to 91 in Malacca, a major tourist destination.
The Malaysian Meteorological Department said visibility Wednesday morning was between 0.6 to 3 kilometers in Sabah and Sarawak - a drastic drop from the normal visibility of more than 10 kilometers.
Data from 13 of the department's 40 measuring stations in other parts of the country showed the visibility was below five kilometers.
A spokeswoman at the Sarawak General Hospital in the state's capital, Kuching, declined to say whether respiratory complaints have gone up with the deteriorating air quality.