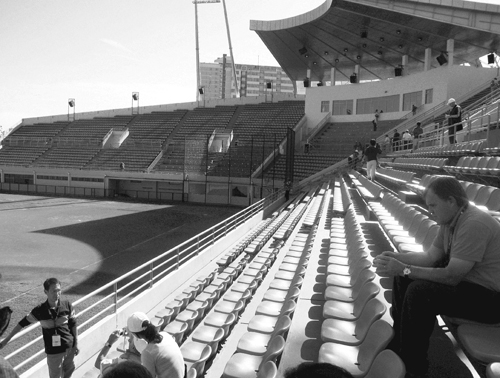 As the countdown ticks toward the 2008 Beijing Olympic Games, Beijing is undergoing a vast makeover that's felt across the metropolis and even around China.
Tens of thousands of laborers toil at the 31 sporting venues under construction or renovation in the capital. A drumbeat of patriotic fervor has begun, and the Olympic Green in north Beijing is blossoming into striking form.
On one side, the "Bird's Nest" national stadium rises in a bedazzling network of interlocking girders, undulating in shape. Nearby, workers install diaphanous panels to the "Water Cube," the shimmering aquatics center.
Many Chinese expect the Summer Games to showcase China's ascent as a world power and hope that they unfold as the best Olympic Games of modern times.
"The government is mobilizing all sorts of resources to ensure that the event is successful. It is regarded as a national event," said Zhan Jiang, dean of the journalism school at China Youth University for Political Sciences.
The games carry some risk, too, because China's ruling Communist Party has pledged to relax censorship and allow freedom for 5,600 accredited foreign journalists during the 2008 summer period, a pledge that is antithetical to its instinctive tight control of the media. Tens of thousands of unaccredited journalists may also come, and reports on China's warts as well as its glories are expected.
"It will be difficult for them to fulfill this promise. But they will do it," Zhan said. "The government pays attention to its image in the foreign press."
Iron hand
Observers already see the games as a watershed moment for China, a time when the country's rulers hope to mold nationalism and pride in their favor.
"The entire Chinese nation very much treasures this opportunity to secure a very good image for China," said Joseph Cheng, a political scientist at City University of Hong Kong. "Chinese authorities are ready to absorb the risks to gain the payoffs."
Even as Chinese rulers relax with one hand, they squeeze with the other to ensure that criticism of the massive spending program doesn't spill into the domestic media. They also have stifled details of the abrupt sacking in June of a Beijing vice mayor in charge of Olympic venue construction, saying only that he was guilty of corruption.
Instead, news reports are relentlessly upbeat.
Over the weekend, President Hu Jintao toured Olympic construction sites, chatting with laborers and saying the Summer Games would boost national confidence and herald a "great national revival."
The government is drawing up dozens of new laws, razing neighborhoods to facilitate subway and road construction, and assuredly declaring that traffic congestion, smog and even weather will be dealt with.
"The party is holding the Olympic Games to show its power to the world and to satisfy its vanity of nationalism and patriotism. I think it is similar to the Berlin Olympics held by the Nazis in 1936," said Yu Jie, a dissident intellectual under surveillance.
Enhancing global stature
Others are less harsh in their comparisons, likening the upcoming Beijing Games to Tokyo's 1964 Games, which signaled the re-emergence of Japan as an industrial power, or the 1988 Games in Seoul, which displayed South Korea's rising global stature.
In any case, crosscurrents are at play as the Beijing organizers declare with only a little squirming that they can embrace Olympic ideals of openness and transparency. The question is whether the games will change China, or vice versa.
At a recent meeting with hundreds of foreign journalists, the head of the Beijing Olympic effort, Liu Qi, said China will live up to its pledge in 2001, when it won the right to host the games, to allow foreign journalists full freedoms during the Olympics.
"China will live up to its words and will turn its words into deeds," Liu said.
But China's own media is unlikely to feel the sunlight.
"The domestic media won't enjoy the same freedoms," Zhan predicted.
Yu, the dissident, said that even if broad Internet censorship for China's 123 million computer users is relaxed during the games, "it won't last long. The control will return as soon as the games are finished."
The physical transformation of Beijing, meanwhile, continues at mighty speed. Organizers say all venues will be fully constructed by the end of 2007, allowing at least six months of test runs, unprecedented in modern Olympic history.
Many Olympic athletes will arrive at Beijing airport through a new third terminal, which at over two miles long will be the largest in the world. Laborers are also racing to build four new subway and urban rail lines, including one that will connect the airport to the city. Sixteen high-rise towers are rising at a media village, and a massive media center with two high-rise hotels as bookends, are going up near the Olympic Green.
Among the new venues are basketball and softball stadiums, a velodrome, shooting range, and a kayak and canoeing facility. Other facilities are undergoing renovation.
Beijing is believed to be spending more than double the US$15.5 billion Athens put into the 2004 Games, and the outlay has spurred some criticism outside China.
A prominent Taiwanese commentator, Long Yingtai, called Olympics spending "the most expensive and biggest project in China since the Great Wall."
Spurred on by a wave of national pride, many Chinese quietly expect to be at the top of the medals table. China won 32 gold medals in Athens, narrowly trailing the 35 the United States won. This time, they expect to surpass the United States.