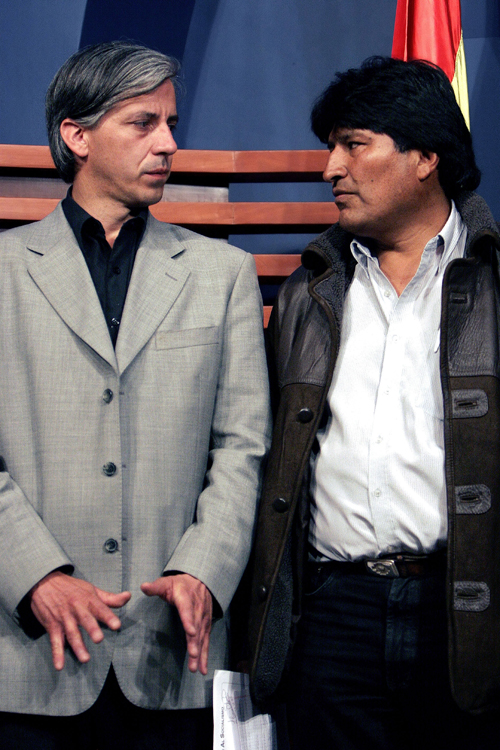 While President Evo Morales has caught the world's attention waving a coca leaf at the United Nations and rushing to the bedside of an ailing Fidel Castro, the tougher assignments for his administration fall to his vice president, a gray-haired academic whose world view has changed little from his days as a Marxist guerrilla.
The lesser known half of the odd-couple leading Bolivia's populist revolution, Alvaro Garcia Linera has taken on so many of Morales' difficult chores recently that some pundits call him "co-president" of the South American nation.
As the top government negotiator at a national assembly rewriting Bolivia's constitution, Garcia has tenaciously defended the pro-Morales majority's effort to push through reforms to benefit the long-suffering indigenous poor.
Garcia also traveled to Washington for drug talks and took the lead in efforts to come to new terms with Brazil's state-run oil company, Petrobras, over profits from Bolivia's nationalized oil and natural gas industry.
'The hardest edge'
Garcia "is no longer in a secondary role," said independent political analyst Cayetano Llobet. "He has begun projecting himself as the hard edge of the government - very coolly, but still the hardest edge."
Morales named the European-descended Garcia to his ticket to broaden his appeal to Bolivia's white and mixed-race middle class in December's presidential election.
In appearance, background, and temperament, the two could hardly be more different.
Morales is of Aymara Indian descent and grew up poor, herding llamas. Garcia's middle-class family sent him to college in Mexico City.
The burly, dark-skinned Morales favors leather jackets, tennis shoes, and a common man's haircut. Garcia, pale and slender, wears tailored suits and keeps his prematurely gray hair long enough to tuck behind one ear.
When speaking, Morales wags a defiant finger as he jumps from topic to topic.
Garcia stands motionless at the lectern, delivering well-structured political essays.
The two men do occasionally switch roles, however: while Morales spoke to a rapt student audience at Columbia University in New York last month, Garcia wore a traditional red woolen poncho in a poor Andean village, urging the indigenous crowd to defend the government "with your chest, with your hand, with a stone, with your Mauser."
A 'yoke of oxen'
The personal relationship between Garcia and Morales remains something of a mystery. In response to rumors of friction between himself and the vice president, Morales has described the two as a "yoke of oxen, who together plow, sow and harvest the hope of the Bolivian people."
When pressed on the issue, Garcia has simply repeated the same metaphor.
Garcia grew up under the military dictatorship of Colonel Hugo Banzer, and witnessed a November 1979 massacre in which soldiers gunned down a group of largely Aymara demonstrators. At least 100 people were killed; Garcia said the event had a "massive impact" on his political thinking.
He joined the leftist Tupac Katari Guerrilla Army, where "we learned to love, to struggle - and also to kill," Garcia recently recalled. Arrested in 1992 for allegedly plotting to blow up power lines, he was tortured and imprisoned without trial for five years, writing political treatises and reading hundreds of books while in jail.
Following his release, Garcia became a college professor, studying Marxist theory and the communal structure of Bolivia's native communities. He also was as a regular guest on a political round-table on Bolivian television.
Television host Mario Espinoza, who worked alongside Garcia for three years and considers him a good friend, says the vice president's core ideas have changed little since his guerrilla days.
"He always was a man who didn't believe in democracy, a man with very clear ideas," Espinoza said, adding that Garcia has "always been a bit of a wolf in sheep's clothing," a "hard man" despite his boyish face and refined manners.
"He himself says he has no soul," Espinoza said.
The vice president, who declined requests for an interview with The Associated Press, has said his background in sociology allows him to govern with a "Siberian coolness." And while he's tried to bring that sensibility to the struggle over Bolivia's constitution, critics say he's driven the process into gridlock.
Determined to push through a new framework reversing the traditional dominance of a European-descended minority, Garcia has fought to keep a tight government grip on the assembly. After orchestrating a compromise in April with the opposition requiring the assembly to approve a new constitution by a two-thirds vote, Garcia backtracked on the agreement after Morales' allies won only just over half the seats in the assembly.
In response, conservatives have said they will not recognize any constitution approved only by the slim pro-Morales majority.
"Unfortunately, Garcia's role as consensus-builder has been totally thrown out," said Jose Antonio Aruquipa, a delegate from the conservative opposition party Podemos. "He has become instead a hawk for the Morales administration's hegemonic and totalitarian policies."
Walking a thin line
Garcia's challenge will be keeping Bolivia's small but politically powerful middle class happy while advancing an ambitious agenda of socialist-oriented reform.
"Ideologically speaking, Garcia is more radical than the president," said Fernando Molina, editor of the newsweekly Pulso. "But he doesn't act that way, because he realizes that what the government needs now above all are alliances with the sectors that allow them to govern."
According to a recent poll of residents in Bolivia's four largest cities, Garcia remains more popular than the president - though both men's approval ratings have dropped significantly in recent weeks.
"Alvaro has to keep the middle class on board, and Evo has to keep stirring up that imperialist rhetoric to keep the masses in line," said Eduardo Gamarra, a Bolivian political scientist at Florida International University. "If you think about it, it's not a bad strategy. It's worked thus far."