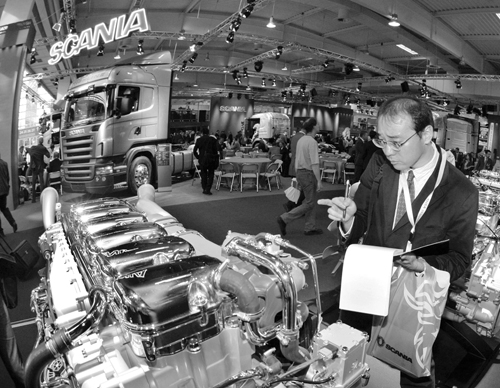 German Automaker Volkswagen AG said yesterday it bought a 15 percent stake in truckmaker MAN AG, which it will use to support three-way cooperation between MAN, Scania AB and its own truck business.
Earlier this month, Munich-based MAN made a 9.6 billion-euro (US$12.2 billion) hostile bid for Scania, in which Volkswagen already owns an 18.7 percent stake. Scania's management and Volkswagen rejected that bid.
Instead, Volkswagen, which has its own, Brazilian-based truck business as well as the Scania stake, now says it is seeking to protect its position in the industry by pursuing what it described as the "industrial logic" of Scania and MAN gaining efficiency advantages by working together.
Volkswagen CEO Bernd Pischetsrieder said in a statement that Volkswagen's own truck business in Brazil could add additional value by helping them expand into emerging markets.
Volkswagen's light truck business also offers synergies, according to the statement.
"MAN and Scania would benefit from being able to offer a full fleet range and one-stop service for customers," the company said.
"The investment should allow Volkswagen to secure its strategic interest in the truck sector and should make possible a friendly and jointly developed solution, which achieves maximum synergies," Volkswagen said.
Scania is Europe's No. 4 maker of commercial vehicles, behind MAN, which is No. 3.
"In light of indications in the market of a hostile takeover attempt of MAN by third parties, this investment in MAN is essential to secure Volkswagen's interest," Volkswagen said.
MAN said it "welcomes Volkswagen as a strategic shareholder and views this as a positive step in the context of its offer to acquire Scania," according to a statement.
Wolfsburg-based Volkswagen said it wasn't interested in a full takeover of MAN.
Volkswagen CEO Bernd Pischetsrieder said last week at the Paris auto show that he preferred a "friendly alliance" between MAN and Scania, instead of a takeover. He argued that VW's stake in Scania, which gives it 34 percent of the voting rights, was "strategic" to its own operations and interests.
Scania and its major shareholders, which include Investor AB as well as VW, rejected MAN's offer, saying it did not reflect the company's true worth.
Analysts have said that MAN would not be able to mount any takeover without Volkswagen's support.