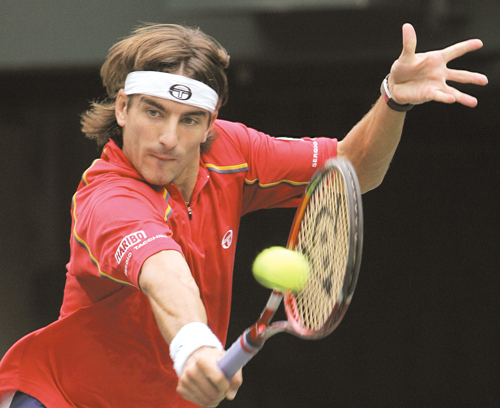 World number one Roger Federer found himself in a unexpected dogfight against qualifier Viktor Troicki before coming out on top in two tie-breaks to keep his Japan Open hopes alive yesterday.
The 25-year-old Swiss, playing his first match since winning the US Open, needed time to get used to the surface here before scoring a 7-6 (7/2), 7-6 (7/3) win over the 276th-ranked Serbian.
Federer said he could not read Troicki's serve well as he saw a total of nine aces flash by.
"It comes from different angles. Maybe I should have taken more advantage on his second serve, but it's my first match of the tournament and I wanted to play safe, too," said the top seeded Swiss who had a bye in the first round.
"It was tough today. It was a tough match. I'm very happy to come through. In the end it was a pretty good match."
Federer took a 2-0 lead at the start, but Troicki soon squared it with a break in the third, signaling a fight was on the cards.
The Swiss star though dug deep to come through when it mattered in the tie-breakers, showing his experience at the Serbian's expense.
"I've never seen him play. It always takes time to figure a player out. He came up with good shots, hardly hit any unforced errors and he served well, so that made it hard for myself to really get a grip on the match," said Federer.
"And I have ability to play well when it matters and that got me through. I was very impressed how he played. I think he's got a very good future."
It earned him a third round crack at defending champion Wesley Moodie of South Africa, who defeated Stefan Koubek of Austria 6-3, 6-4.
Murray falls to Novak
But Britain's rising star Andy Murray, the only player to have beaten Federer before the finals this season, crashed out of the tournament to 2004 champion Jiri Novak of the Czech Republic.
"I was three matches away from playing against him (Federer) and in these tournaments you can't expect to get to the semifinals every week. It's difficult," said Murray after his 6-3, 7-6 (7/1) loss in 72 minutes.
"Roger Federer or only those at his level can do it, so I wasn't looking far ahead," added the 19-year-old, who defeated Federer at Cincinnati in August.
Robredo beats Lu
Second seed Tommy Robredo of Spain joined Novak and Federer in the third round, beating Lu Yen-hsun of Taiwan 6-4, 6-1. Moodie outclassed Stefan Koubek of Austria 6-3, 6-4.
Rainer Schuettler of Germany, the winner here in 2003, upset 16th seed Paul Goldstein of the United States 6-3, 6-2, and Juan Monaco downed fellow Argentine Edgardo Massa 7-6 (7/4), 6-3.
In women's play, second seeded Ai Sugiyama of Japan posted a 6-4, 6-3 win over Finland's Emma Laine in the first round and Spanish No. 4 Anabel Medina Garrigues ground out a 7-6 (3), 7-5 win over Klara Zakopalova of the Czech Republic.
Greece's Eleni Daniilidou, who won the Korea Open on Sunday, retired in the second set of her match against Frenchwoman Camille Pin while leading 6-1, 1-1.