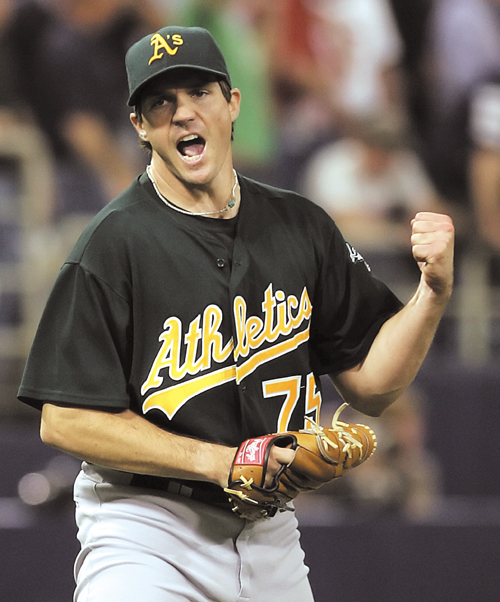 Johan Santana felt the heat Tuesday and shouldered the blame. He wasn't perfect in the Twins' 3-2 loss to the Oakland Athletics in Game 1 of the American League Division Series. He accepted that. But there was one thing Santana wouldn't accept: the suggestion that because he lost, his teammates are now finished.
"I don't think they think that way," Santana said. "I mean, they better not be thinking that way because if so, then we're not going to have any chance."
It's out of Santana's hands now. For the next two games, at least, he'll have to watch and see if the Twins can prolong this best-of-five series long enough for him to make another impact this season.
The Twins had gone 23-0 in his starts at the Metrodome since August 1, 2005, so no matter how well Barry Zito pitched, this loss left an October chill.
Oakland jumped to a 2-0 second-inning lead against Santana on a home run from Frank Thomas and a two-out, run-scoring double from Marco Scutaro, then held on for a victory that hushed a crowd of 55,542 at the Metrodome.
Afterward, as the national media gathered with questions, Santana used his answers to will his teammates forward.
"We need to step up and play better baseball," he said. "That's reality. If we're not able to do that, we're not going to win."
Santana held the A's to those two runs over eight innings, but Zito won the battle of lefthanded Cy Young winners, holding the Twins to one run over his eight innings.
It was a day of wasted chances for the Twins, who went 0-for-9 with runners in scoring position.
Santana breezed through the first inning, and the sellout crowd was rocking when Luis Castillo drew a leadoff walk in the first inning.
But with a 2-2 count to Nick Punto, Castillo was caught stealing second base, thrown out by A's catcher Jason Kendall, who had nabbed just 30 percent of his attempted base stealers this year.
"I thought that was the biggest play of the game, really," Oakland manager Ken Macha said.
Oakland grabbed the lead the next inning, and the Twins didn't have a hit off Zito until Rondell White doubled with two outs in the fifth.
But Santana was masterful after those second inning hiccups.
The Homer Hankies were back out, with the crowd anticipating more Twins magic.
"We always seem to come back in the late innings," Bartlett said. "I think everyone thought that was going to happen again tonight."
White's home run off Zito trimmed Oakland's lead to 2-1 in the seventh, and Bartlett doubled to start the eighth.
No matter what Macha said, the day's biggest play came next, as Castillo failed to advance Bartlett to third. After showing bunt on Zito's first pitch, Castillo grounded out to third base, forcing Bartlett to hold.
Zito retired Nick Punto and Joe Mauer to end the inning.
"We usually get that run in," Punto said. "We didn't tonight."
Jesse Crain relieved Santana to start the ninth, and Thomas struck for another leadoff home run, hitting a second ball into the left-field seats.
That extra run loomed large, as A's right fielder Milton Bradley lost a fly ball in the Teflon roof, giving Michael Cuddyer a gift triple to start the Twins' ninth. Huston Street retired the next three batters to earn the save.
"I think that game was bigger for them than it was for us," A's third baseman Eric Chavez said. "Obviously every game is big, but for their psyche, having them lose Game 1 with (Santana pitching) is huge."
Now, Santana must count on his teammates to prove Chavez wrong.