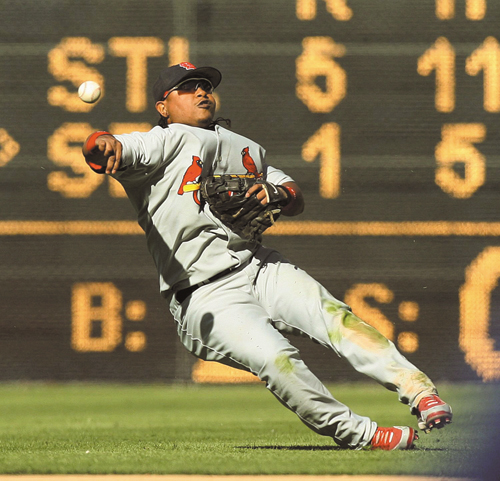 Almost all baseball observers would conclude that the San Diego Padres have better pitching depth than the St. Louis Cardinals, both in the rotation and the bullpen. In fact, the Padres led the National League in earned-run average this season by a wide margin.
The Cardinals have Albert Pujols, and the Padres, like all other teams, don't. That leaves defense as the final consideration between the two teams, and though the Padres finished .01 ahead of the Cardinals in the National League final defensive statistics, they didn't beat them at that game Tuesday in the opener of the NL first-round series.
Cardinals second baseman Ronnie Belliard took one and probably two runs away with a dazzling seventh-inning play on San Diego's Todd Walker, and Padres catcher Mike Piazza hit the wall - literally - as he missed a fourth-inning pop foul that dropped behind him near the screen. That misfire gave the hitter another chance, and that hitter was Pujols, who cracked a misplaced 3-2 cutter by righthander Jake Peavy for a two-run homer that started the Cardinals on their way to a 5-1 victory
San Diego is 0-7 in postseason play against the Cardinals, and Peavy has lost twice to Chris Carpenter in the last two opening games of first-round series. His ERA over those games is 12.10, so it seems clear he wasn't up the task again Tuesday, especially vs. Pujols, who hit his 50th homer this year.
"It was a cutter that was right down the middle," Peavy said. "Those go wrong a lot."
But if Piazza catches the pop foul, the score still is 0-0 and maybe Scott Rolen doesn't, in Peavy's words, "throw a land mine" into right field for a double that set up another Cards run in the inning.
"Obviously, I need it to get made," said Peavy, when first asked about it. "Just a popup." But then he said, "I mean, obviously those are not the easiest plays to make, you know."
Peavy would reverse his field a couple of more times in his analysis of the play.
"There's no doubt about it, it was game-changing," he said. But then he finished with "Mike tried his hardest and that's all you can ask from somebody."
When Piazza goes into the Hall of Fame, he will be going to Cooperstown despite his defensive liabilities, which largely have been confined to his poor throwing. There was some discussion, even on television Tuesday, that Pujols' ball had ticked the net in front of the box seats between home and third and that Piazza hadn't had a real shot at it as it landed behind him.
But plate umpire Gerry Davis said he and his crew didn't think the ball hit the netting, and even though Piazza considered that it might have, he really didn't seem to believe that, either.
"I just couldn't make the play," Piazza said. "It's frustrating."
"(Pujols) took a big swing. The sun was tough today. But by the time I looked up, (the ball) seemed like it came back 15 rows from the stands. There was a little wind and there was some spin on the ball."
Trailing 5-1, the Padres had a sniff in the seventh, but it was snuffed by Belliard's brilliant play on Walker's bases-loaded smash.
"Great play," Walker said. "It's very frustrating, but I've played this game long enough to know that this stuff happens. It's a game of fate. I'm a big believer in that."