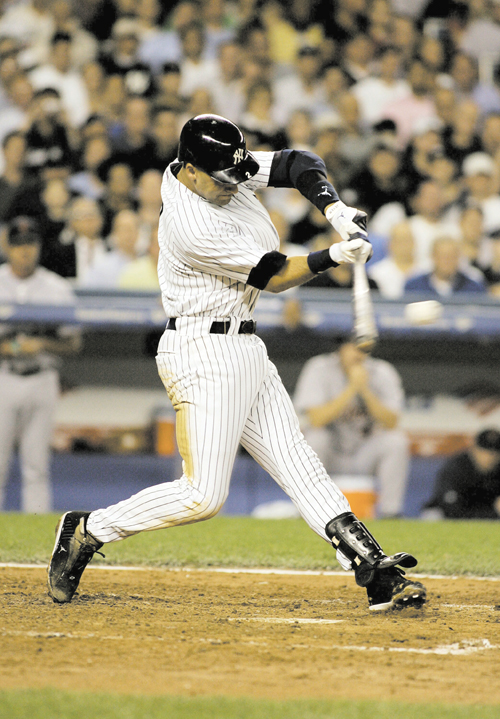 The tabloids have it all wrong. While the soap opera of Alex Rodriguez continues - the latest being the demotion to sixth in the batting order - the more relevant story plays out just at shortstop, where all Derek Jeter does is help win playoff games.
Tuesday night, the Tigers got a chance to see what the rest of baseball has seen the past 10 years. He welcomed Detroit back to the playoffs for the first time in a generation by going 5-for-5.
The seven-time all-star hit five sharp line drives - single, double, single, double, home run. He drove in a run. He scored three times. And perhaps more deflating to the Tigers, he scooped up a Placido Polanco grounder and began an inning-ending double play in the third. The result: Yankees 8, Tigers 4.
Two all-stars. One whose story unfolds in screaming headlines. The other's whose unfolds on the field.
About the only thing Jeter did wrong all night wasn't really his fault. He got caught between first and second on a failed hit-and-run. Yankees right fielder Bobby Abreu took a high pitch inside and was unable to swing, stranding Jeter.
"He seems to relish this atmosphere," Yankees manager Joe Torre said.
That seems to be an understatement. As Jeter opened the playoffs with his spectacular night, the Rodriguez demotion faded into the night. In fact, one of the loudest cheers of the night rained down when the third baseman approached the plate his first time up. It was a psychological roar, designed to made Rodriguez feel better.
"It was very nice," he said of the applause. "I enjoyed it."
Rodriguez finished the night 1-for-4, hit the ball hard, didn't make an error and generally didn't affect the game either way.
Jeter, though, simply did what he's always done. He's played in 43 games now in the American League Division Series. He's batted almost .360, collecting 64 hits, nine home runs and 21 RBIs.
"He's a very special player," Rodriguez said. "I'm proud to be his teammate."
He has produced so many clutch hits and defensive plays that they blend together into a kind of spectacular loop. Jeter credits, in part, his attitude. "You can't be afraid to fail," he said after the game.
Tuesday night brought that approach again, seducing the crowd, once more, to deliriously chant his name.