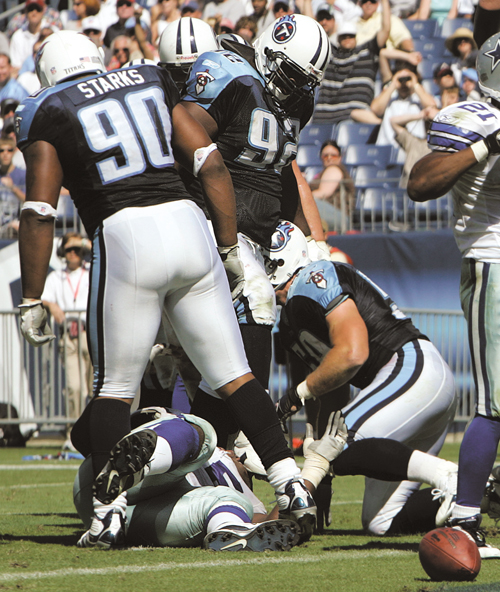 The public reaction to Albert Haynesworth's punt of Andre Gurode's face has ranged from indignation to horror.
And the question of the day is, why?
Why are we so surprised one NFL player would inflict violence on another player during a game? A week doesn't seem to go by without a player doing something criminal off the field. Why would we be stunned when an athlete exhibits antisocial behavior on the field?
That's if you consider kicking another human being in the face to be antisocial.
The NFL suspended Haynesworth, a Titans defensive tackle, for kicking and stomping Gurode after the Cowboys guard had lost his helmet in the third quarter Sunday. The cuts required 30 stitches. Sometimes that seems like a regular night out for an NFL player.
Look, these are not well-balanced people. These are violent people. That, in part, is what makes them good football players. And it's why we tune in, buy tickets, plan Super Bowl parties.
Is it not difficult to picture getting into a fight with a fellow employee at an outing? But that's what the Bears' Olin Kreutz and Fred Miller did at an FBI shooting range last year. It started with a Kreutz punch that broke Miller's jaw and ended with Miller flinging a 5-pound weight at Kreutz's head, opening a gash that required 13 stitches.
And how many times have you walked into a Denny's and gotten into an altercation with another diner? That's what happened to Bears defensive back Ricky Manning Jr., who pleaded no contest to assault charges after allegedly poking a man in the head earlier in the year.
Admit it, we shrug: These things happen all the time with these kinds of people. (Sociologists argue that the incidence rate of crime among pro athletes is no higher than it is among the general population.)
So why, then, were we shocked when Haynesworth kicked Gurode? Maybe because we've been fooling ourselves. Maybe because we've been separating ourselves from the reality that these are fierce human beings. I'm not sure what we thought. That this was a choreographed reality show?
You really wouldn't want to meet some of these people in a dark alley.
The image of Gurode getting acquainted with Haynesworth's cleat was sickening. The NFL responded quickly by suspending Haynesworth without pay for five games.
If you think this was an isolated incident hink again. While at the University of Tennessee he fought with teammate Will Ofenheusle during practice, then returned with a long pole before coach Phillip Fulmer stopped him. He also kicked then-teammate Justin Hartwig during Titans training camp in 2003.
Emotions make football players do really, really stupid things. Illinois wins a Big Ten game for the first time in eons, and players plant an Illini flag at midfield of Michigan State's stadium, sparking a skirmish with the Spartans. What makes someone think that's a good idea?
That's a long way from a kick in the face but not miles and miles. Football is not the thinking man's game. It's the emotional man's game, played by people who often are right up against the edge of sanity, especially on game day.
Who thought they could ever shock us?