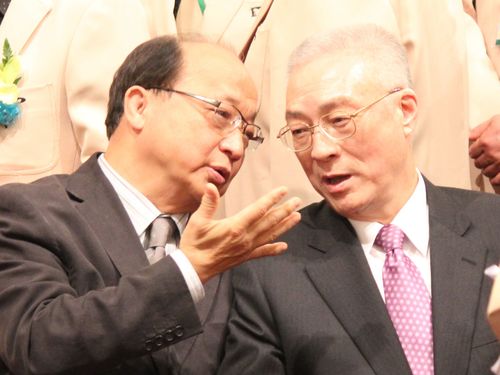 TAIPEI (Taiwan News) – Taichung Mayor Jason Hu won the Kuomintang opinion poll to run in the November mayor election, the ruling party announced Saturday.
Hu has managed the nation’s third city since 2001 and is likely to face a stiff challenge from Democratic Progressive Party lawmaker Lin Chia-lung in the November 29 election.
The former foreign minister and Cabinet spokesman defeated lawmakers Tsai Chin-lung and Chi Kuo-tung by winning half the votes in the polls conducted Thursday and Friday evening, reports said. Despite criticism earlier in the campaign, Tsai pledged his support after the results were announced Saturday.
Hu has come under fire for holding on for too long to the same post, while at the same time threatening that if he lost re-election, it would signify “the end of the Republic of China.”
According to the results of the first of two opinion polls conducted by two different firms, Hu won about 50.6 percent, Tsai came second with 27.9 percent and Chi third with 18.7 percent. The other poll also showed Hu in the lead with 49.7 percent and gave 27.4 percent to Tsai and 20 percent to Chi.
The average total result was 50.1 percent for the incumbent mayor, 27.6 percent for Tsai and 22.1 percent for Chi. The chairman of the KMT’s Taichung department said the result of the polls would be passed on to the party’s Central Standing Committee. Its March 19 meeting was likely to approve the result and officially proclaim Hu as the KMT candidate for the November mayoral election.
Taichung City will be a key battleground because of its geographical position in the center of the country between the DPP-controlled south and the KMT-dominated north. The opposition party has said its aim is to win three of the nation’s six special municipalities. With Kaohsiung and Tainan seen as DPP strongholds, Taichung would be the most likely city to tip into the opposition camp, observers said.
Hu said there was no surprise in Saturday’s results, and his responsibility was heavy. He was not prepared to say how he would face Lin’s challenge, but the KMT was likely to try and emphasize Hu’s achievements in order to disarm criticism about his long term in office, reports said. He ran the legal maximum of two full terms as mayor of Taichung City from 2001 to 2009, but his final term was extended until 2010 in the run-up to a merger with Taichung County. Hu has been allowed to run for two terms as mayor of the new entity, also called Taichung City. Similar changes happened with Kaohsiung and Tainan.
Lin congratulated Hu, but said the emergence of the KMT’s official candidate would not influence the tone or content of his own campaign. He pointed out that Hu’s result meant that half of all KMT supporters wanted a new mayor. According to Lin, his own polls showed him leading Hu by more than the margin of error. The mayor might still mobilize local factions and misuse city government resources to try and defeat him, the opposition candidate said, cautioning his supporters against too much optimism.
The incumbent told reporters that the opinion polls he had seen showed him and Lin each winning half the vote. “I’m a fighter, I will make you see how I win,” he reportedly said.