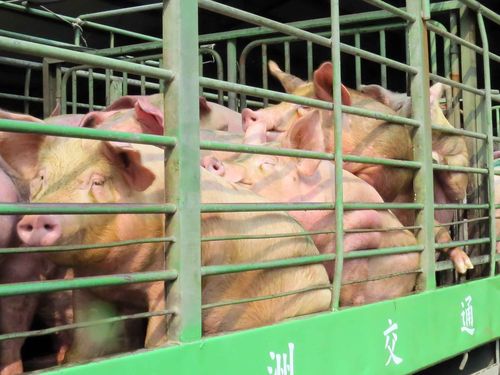 Taipei, March 13 (CNA) Taiwan's consumer price index (CPI) is likely to rise in March in reflection of higher pork prices, after a slight drop the previous month, a top government statistician said Thursday. Shih Su-mei, chairwoman of the Directorate General of Budget, Accounting and Statistics (DGBAS), said her estimate was based on domestic wholesale pork prices, which have been escalating since late February. Speaking in the Legislature's financial committee, Shih said the effects of higher wholesale pork prices on consumer prices will become more evident in March.
Late last month, pork prices in the local market hit a 10-year high after porcine epidemic diarrhea (PED) decimated the piglet population in Taiwan, and the uptrend has since continued.
While Shih did not give any forecast about the March CPI growth, she said an annual 10 percent hike in pork prices usually results in a one percentage point increase in local consumer prices.
In February, local consumer prices fell 0.05 percent from a year earlier, largely on a decline in electronics product prices and certain services fees such as phone rates and babysitting costs, the DGBAS said.
Food prices, however, rose 2.54 percent year-on-year in February, with meat prices up 6.18 percent, according to the DGBAS.
In the first two months of this year, the local CPI rose 0.39 percent year-on-year.
Despite the low inflation in the past two months, many local consumers have complained that the government's CPI data failed to reflect reality as dining out has become more expensive because of higher food prices.
Last week, Taiwan's central bank governor Perng Fai-nan said he expected the local CPI for 2014 to grow at a faster pace than the DGBAS's forecast of 1.07 percent as the agency's estimate had not taken into account a spike in pork prices ahead of the outbreak of the deadly pig virus. Nonetheless, Perng said, he believed the uptrend would be tolerable. (By Lin Meng-ju and Frances Huang)