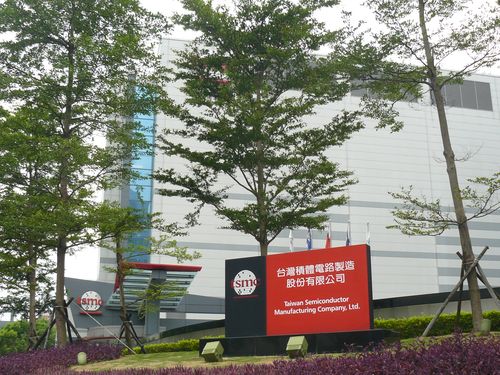 Taipei, March 12 (CNA) The market capitalization of Taiwan Semiconductor Manufacturing Co. (TSMC), the world's largest contract chip maker, topped NT$3 trillion (US$42.9 billion) Thursday.
TSMC shares got a boost from a move by the company to raise its sales guidance for the first quarter of this year on the back of solid demand for chips manufactured on the advanced 28 nanometer process. The stock closed up 3.10 percent to close at NT$116.50, with 56.99 million shares changing hands. The uptrend was capped in the latter part of the session with some investors locking in profits after the shares hit a more-than 13-year high of NT$117.50.
Based on TSMC's paid-in capital of NT$259.283 billion, market capitalization reached about NT$3.02 trillion after the local bourse closed. Shares of TSMC opened sharply higher as investors took cues from the upgraded sales forecast, in which the chip maker said its first consolidated sales will total NT$147 billion, up from an earlier estimate of NT$136 billion-NT$138 billion.
The revised sales forecast represented a 0.8 percent increase from the fourth quarter, indicating that TSMC will not feel the pinch of the slow-season effect impact in the quarter.
The old sales estimate represented a 5-7 percent sequential drop after TSMC took the slow-season effect into account.
Meanwhile, TSMC has raised its forecast of gross margin to 47 percent for the first quarter from an earlier estimate of 44.5-46.5 percent. The chip maker has also upgraded its operating margin forecast to 35 percent from 32-34 percent.
Market analysts said TSMC has benefited from the lead over its peers in high-end technology process development. In addition to the 28nm process, TSMC has embarked on the more advanced 20nm process wafer production and is expected to start 16nm process wafer production next year.
Barclays Capital said it remained upbeat about TSMC's earnings outlook. Following the sales guidance upgrade, the brokerage raised its forecast of TSMC's earnings per share for the first quarter to NT$1.71 from NT$1.51. (By Jackson Chang and Frances Huang)