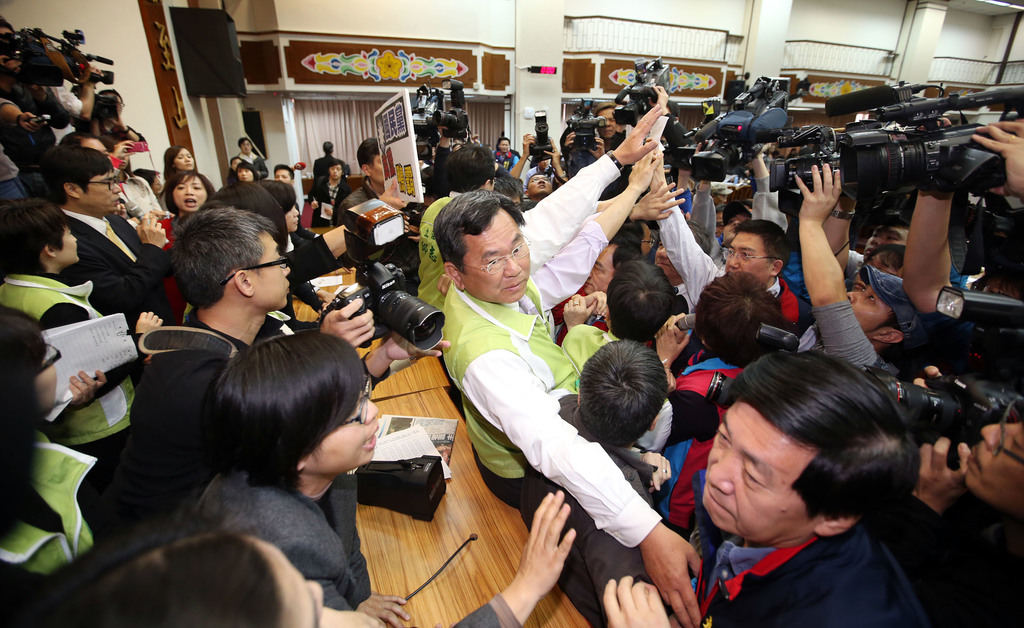 The Legislative Yuan started another day of review of the service trade pact with China Thursday amid widespread feuding. Opposition DPP legislators all left their seats soon after the opening, while ruling KMT legislators occupied the podium. The meeting ended up with an early intermission as the confrontation remained.

A joint review session by eight permanent committees reviewed the cross-strait agreement on trade in services Thursday, but the meeting broke down within ten minutes as both parties constantly interrupted the procedures. Thursday’s review session was convened by DPP legislator Chen Chi-mai, who upset the KMT because he wanted to manage the proceedings.

The KMT caucus has also proposed to veto the parliamentary proceedings made one day ago as an act of protest for being deprived of the rights of speech.

DPP legislators Yeh Yi-chin and Lee Chun-yee revealed photos on the sideline accusing KMT legislators Alex Fai and Lin Tsang-min of using violence in the chaos during the meeting.

The minor opposition Taiwan Solidarity Union (TSU) joined the DPP in voicing strong opposition to the deal on the same day. TSU Chairman Huang Kun-huei urged legislators to review the service trade pact item by item and to block the deal which President Ma Ying-jeou wishes to clear all hurdles by June. Huang also criticized Premier Jiang Yi-huah’s hard-line attitude against any changes in the deal.

The chairman of the Shanghai Association of Taiwan Business People, Yeh Hui-te, expressed worries over the stifled debates on the service trade pact with China. Lin Ching-fa, the chairman of the Beijing Association of Taiwan Enterprises, expressed concern over opportunities and edges for Taiwanese small and mid-sized enterprises slipping away while losing ground to Taiwan’s competitor South Korea.

Mainland Affairs Council Minister Wang Yu-chi said in a media interview that he hoped the pact can win approval at the earliest but will respect the decision made by the legislators either way.