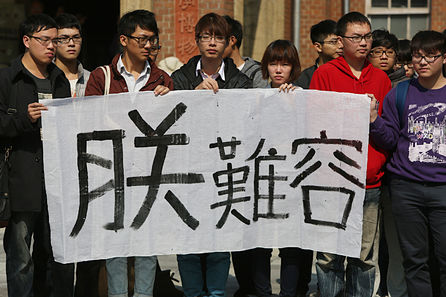 Students at National Cheng Kung University (NCKU) in Tainan have been struggling with the school administration for a month over whether they have the right to name a newly-created plaza on the school campus. NCKU originally threw the selection open to the student body in an Internet vote. School officials changed their minds, however, on seeing the results. Of some 3500 votes cast, nearly a thousand were for Deng Nan-jung, aka Nylon Deng, a dedicated advocate of free speech and Taiwan Democracy best known in many circles for his self-immolation in 1989.

The administration quickly reversed itself, offering to present a short list of names for students to choose from. The list included people like Jin Wu, a respected academic, former president of NCKU and Minister of Education, and Samuel Ting, a Nobel Prize-winning American physicist of Chinese descent who studied at NCKU.

While the list included distinguished figures who have brought prestige to NCKU, the administration’s action in rejecting the students’ choice of Deng represents a breach of trust not in keeping with what one expects from a distinguished institution of higher learning.

What set off the hottest reaction, however, was the attitude of history professor Wang Wen-hsia, who labeled Deng as “the equivalent of Islamic bombers." Professor Wang went on to say the contributions made by Deng to Taiwan's democracy are not important because, as she put it, a lot of people brought more "tangible" results to the democratic process.

As for Deng’s accomplishments, if you look at the accomplishments of Deng and someone like Ma Ying-jeou, it does not take long to figure out who has made the bigger contribution to democracy in Taiwan,

Deng’s act of self-immolation has been identified as one of the key reasons President Chiang Ching-kuo lifted martial law and instituted government reforms in 1989. As a result, Ma Ying-jeou is free today to enjoy the fruits of the labors of Taiwan’s martyrs to democracy, elected to the nation’s highest office in a political system which – while flawed in some ways – is widely recognized as among the most democratic in the world.

What, then, is wrong with calling the square ‘Nan-jung Plaza’? Deng was not a terrorist – he was the only ‘victim’ of his actions, and the only other person to suffer in connection with him was Chan I-hua, who immolated himself when Deng’s funeral procession in Taipei was blockaded. Deng’s impact on the democratic movement in Taiwan consisted of making people aware of the importance of free speech and democratic rights. In a true democracy, this is no less important than bringing about certain social "reforms."

In 1999 Time magazine named Britain’s radical feminist movement leader Emmeline Pankhurst one of 100 major figures of the 20th century. Her selection was not so much because she achieved "real" democratic reforms, said editors, but because she took extreme measures such as hunger strikes that sparked the feminist community into discussions and public outcries. This is precisely what Deng Nan-jung helped bring about in Taiwan’s democracy movement.

Responding to Wang’s remark about terrorism, Professor Li Hsiao-feng of Shih Hsin University asked whether the fact that Lu Hao-tung made bombs that helped spark the uprising against the Ching Dynasty means he should also be viewed as a terrorist. Sun Yat-sen, the “Father of China,” often bought firearms overseas and had them shipped to China to support his revolution, said Li, which by the school’s line of reasoning would make him a super-terrorist.

“If Deng Nan-jung was a bomber,” asked one student online, “was Sun Yat-sen the bin Laden of his time?" No. Deng self-immolated, dying for democracy in a fire that he started, and never hurt a single other person.

Deng, whose father was from Fujian and whose mother was from Keelung, described himself simply: “I am a Chinese descendent. And I support Taiwan independence.” He emphasized that he was the son of parents from either side of the Taiwan Strait, "born the year of the 228 Incident.” He noted that neighbors protected his ‘mainland’ family from retaliation by Taiwanese during the violence that followed the 228 incident.

In March 1984 Deng founded Freedom Era Weekly magazine, a publication dedicated to "fighting for 100% freedom of speech" in Taiwan. The magazine was banned several times by authorities, but Cheng had registered it under various titles and continued to print and distribute weekly editions sold ‘under the counter’.

Today the NCKU administration and some faculty members are apparently still trapped in the mentality that locked down Taiwan for decades under martial law, a mindset that sees people like Deng as rebel elements. One can only imagine how delighted they might have been had students voted to dub the new plaza "Ma Ying-jeou Square" or "Chiang Ching-kuo Plaza." They would have fallen all over each other scrambling to have the name immediately inscribed on a plaque and installed.

As things stand now, the square may wind up being a no-name plaza. NCKU authorities are leaning toward abandoning the whole naming process. At the same time, Professor Wang has issued a somewhat muddled apology for her remarks, saying she holds Deng and others in high regard for their contributions to Taiwan’s democratic development, and did not intend to vilify him. Students find her explanation hard to swallow.

Students have other plans in mind. They intend to organize their own ceremony to formally name the plaza “Nan-jung Square” when the new semester begins. Sounds pretty democratic to us.

Former DPP chair Tsai Ing-wen recalled Deng and his accomplishments in a memorial service a couple of years ago. “He was a selfless hero who taught us to fearlessly seek the truth and bravely defend our beliefs,” she said. “Only through [these] sacrifices could Taiwan have the hard-won democratic freedoms we see today.”

All too often Deng is remembered only for his death in memorials on April 7. ‘Nan-jung Plaza’ will represent an every-day reminder of his life and deeds, and for students of NCKU and for Taiwan, that is another benefit of the freedom that democracy brings.