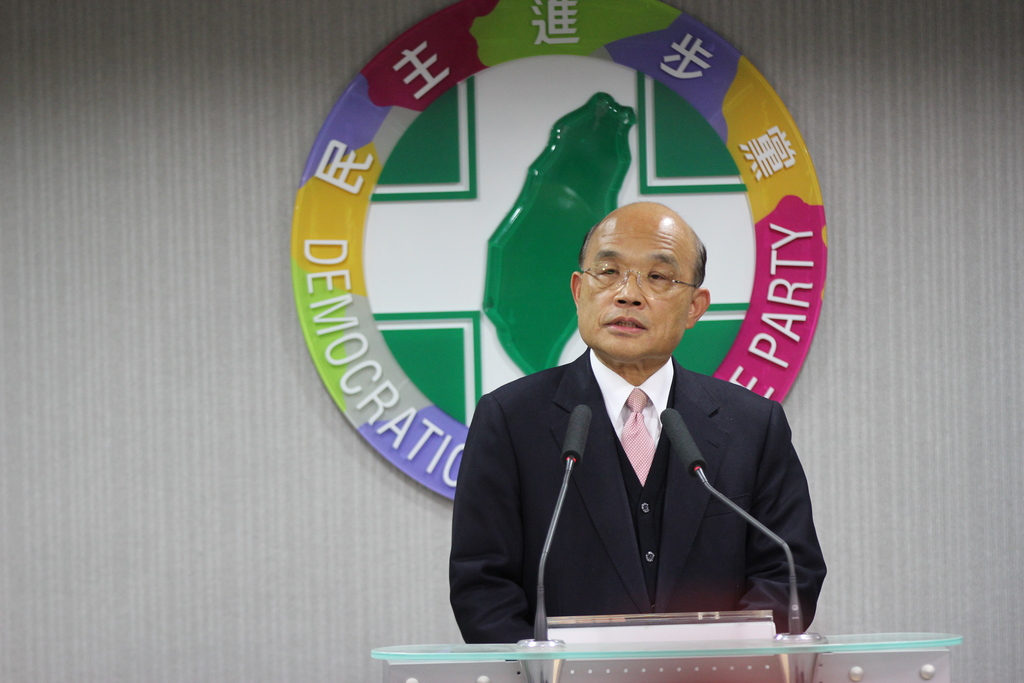 TAIPEI (Taiwan News) – The opposition Democratic Progressive Party said Thursday it encouraged contacts between local governments and think tanks in Taiwan and China, but a debate about the role of the Constitution had not been completed yet.
The party’s China Affairs Committee met for two and a half hours during the afternoon to discuss a report which was the result of months of wider discussions and debates.
The committee includes nine senior party leaders, though Chiou I-jen, a former party secretary-general and National Security Council secretary-general, was absent because of an overseas trip, reports said.
DPP Chairman Su Tseng-chang, who served as the committee’s convener, said after the meeting that the party had the confidence to engage in active contacts between think tanks and local city and county government in Taiwan with their counterparts in China. The opposition party also relaxed its attitude toward students, spouses and tourists from China, reports said.
Former Premier Frank Hsieh, an advocate for more open relations with China, told reporters on leaving the meeting that the discussions about the role of the Constitution had not been brought to an end yet and should be continued.
Hsieh launched a formula known as “Different Constitutions, Different Interpretations” months ago, but the proposal met with vehement opposition from within the DPP and from related organizations, who saw his move as a concession to the ruling Kuomintang’s One China claims and as an abandonment of the party’s defense of Taiwanese sovereignty.
Hsieh said there was no “constitutional consensus” within the party yet. Entering Thursday’s meeting, he told reporters that major changes reached by the China Affairs Committee should be submitted to opinion surveys to gauge whether they enjoyed sufficient public support to become official party policy.
The former premier has been at the forefront of efforts to with two visits to China and meetings with Chinese government officials under his belt
Committee spokesman Cheng Wen-tsang confirmed that there were still differences over the wording of an eventual “constitutional consensus” and that discussions would have to continue during the next phase of the China policy debate.
Hsieh reportedly sparred with another ex-premier on the committee, Yu Shyi-kun, who emphasized the party’s traditional values. It was difficult for Taiwan to change China on its own, but it could not abandon its ideals, Yu said, adding that the DPP should continue to fight for freedom and democracy.
Thursday’s meetings reached no decisions about amending or replacing some of the party’s key documents, such as the 1991 Taiwan Independence clause and the 1999 Resolution on Taiwan’s Future, reports said. The former emphasized the need for a new Constitution for a new Republic of Taiwan, while the latter, passed after the introduction of direct presidential elections, said that Taiwan was already a sovereign and independent country.
It was not immediately known whether chief legislative whip Ker Chien-ming, also a member of the China Affairs Committee, had mentioned his sharply criticized proposal to freeze the Taiwan Independence clause again. When he first suggested the idea to improve relations with China, he was accused of being ready to betray the DPP’s core values.
At the news conference after the meeting, Su emphasized the need for Taiwan to maintain its technological lead and to keep its ability to defend itself and deter an attack. On the diplomatic front, Taiwan needed to strengthen its relations with other democratic countries in the region, he said.
Thursday’s discussions were not an ending, but a beginning of regular reports about the results of dialogue, according to the opposition leader.
The report, which had initially been announced as a general conclusion about the DPP’s China policies, was renamed as a package of reflections about China policy for 2014, reports said.
Su acknowledged that its contents might not satisfy everybody, but it was a sign that the DPP was willing to face the issues in a serious way and to move with the times.