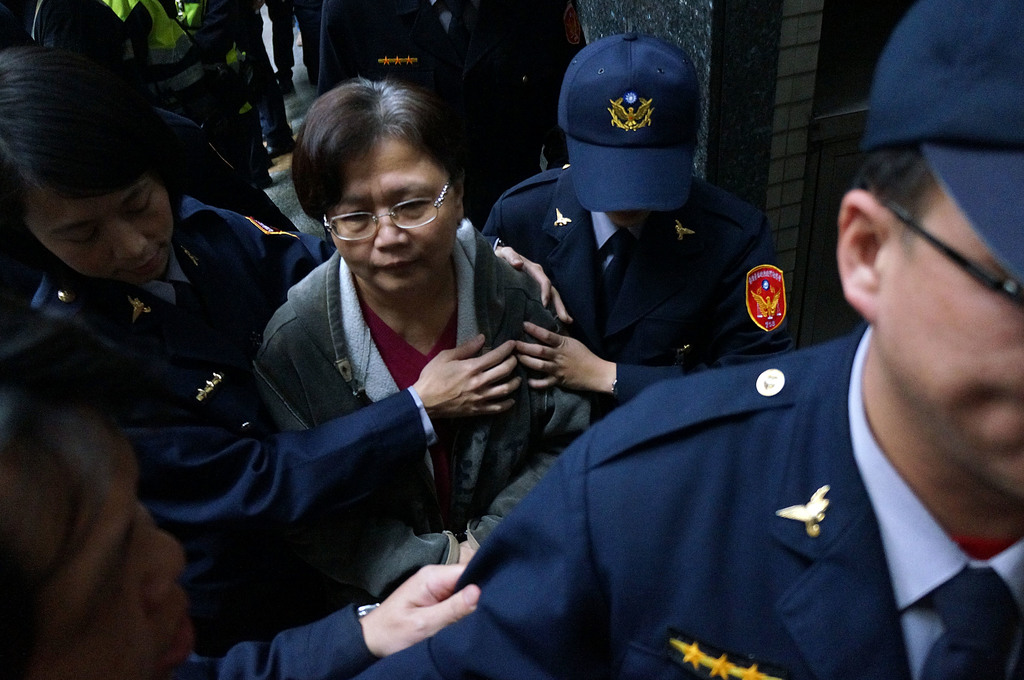 TAIPEI (Taiwan News) – Former Transportation Minister Kuo Yao-chi started her eight-year prison sentence for corruption Wednesday as supporters turned up to defend her innocence.
Kuo, a member of the administration of then-President Chen Shui-bian, described herself as a political prisoner and said the verdict was unfair because it relied on false accusations. Last-ditch requests for a retrial and a postponement of the prison term on medical grounds were rejected over the past few days.
The Supreme Court confirmed her prison sentence last December 5 after she was found guilty of accepting US$20,000 (NT$600,000) from the Nan Ren Hu Group in return for favoring it in a bid for projects at the Taipei Railway Station in 2006.
About 100 people turned up outside the Taipei District Prosecutors Office Wednesday morning to express their support for Kuo. Among those present were two contenders for the Taipei City mayoralty, attorney Wellington Koo and trauma expert Ko Wen-je.
“Political persecution, the minister is not guilty,” supporters shouted as she arrived.
Kuo told reporters she had always respected the law throughout her career as a public official and had never accepted bribes.
“I am a political prisoner, not a corrupt criminal,” Kuo said.
The former minister said that she had now witnessed how the judiciary could retry a person without any relevant evidence and overturn an earlier not-guilty verdict without investigating real evidence. The verdict would lead to even more innocent people being locked up, but she would not give up filing objections and special appeals, Kuo said.
The Taipei District Court and the Taiwan High Court first found her not guilty, but that changed after a court then threw the case back to the beginning.
She had initially said she would launch a hunger strike the day she had to enter jail, but because her elderly mother had threatened to jump into the sea with her father if she did, she had changed her mind, Kuo told reporters. She added that prosecutors visiting her parents told her she would have to admit guilt if she wanted to stay out of prison.
Before entering the prosecutors’ office carrying a Bible and classic books, Kuo said goodbye to her former vice minister Ho Chen Tan and to former Control Yuan member Chang Fu-mei.
A vehicle transported her to the Taipei Prison around 10:30 a.m., reports said. Prosecutors noted that she might suffer from high blood pressure after a recent stay in hospital and would need special medical supervision.
Supporters on Tuesday filed suits against eleven judges who ruled in her case, accusing them of abuse of power and various other legal transgressions.
Democratic Progressive Party lawmaker Lawrence Kao said the opposition would use the next session of the Legislative Yuan to push for the necessary legal reforms.
The allegations against Kuo went back to 2006, when several floors of the Taipei Railway Station were to be converted into shops and restaurants. Nan Ren Hu Group Chairman Lee Ching-po, reportedly an old acquaintance of Kuo, wanted to bid for the project.
He said he told his son, Lee Tsung-hsien to put US$20,000 in a metal tea box as a present to help fund the US studies of Kuo’s son. The then-minister denied ever having received money.
Investigators reportedly found the box at her home, but without money inside. Lee and his son were not indicted. Their group dropped its bid for the project because of extra costs, though not before Kuo was accused of having ordered the Taiwan Railway Administration to revise tender details, allegedly to benefit Nan Ren Hu.
She filed a suit for perjury against the younger Lee at the Taipei District Prosecutors Office on December 12.