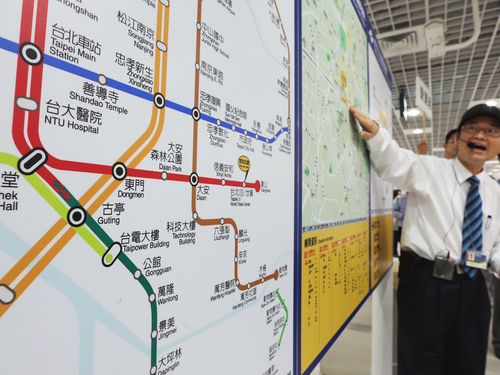 Market & Commodity ■ Taiwan stock market (TAIEX) opened higher at 8,633 points, up 10 point, on turnover of NT$2.17 billion. ■ Stocks are little changed in quiet trading on Monday as Wall Street gets ready to close the books on a historic year. The Dow Jones industrial average edged up 25 points, or 0.2 percent, to 16,504. The Standard & Poor's 500 index was flat at 1,841. The Nasdaq composite slipped two points to 4,154. (AP) ■ The price of oil retreated slightly in thin trading Monday to close below $100. Benchmark U.S. crude for February delivery ended the day down $1.03, closing at $99.29 a barrel on the New York Mercantile Exchange. (AP) ■ Gold for February delivery fell $10.20, or 0.8%, to settle at $1,203.80 an ounce on the New York Mercantile Exchange. World News ■ The European Central Bank's president says Europe's economy is showing encouraging signs though the crisis isn't yet over. The 17-nation eurozone is gradually recovering from recession. With inflation low, the ECB's benchmark interest rate is a record-low 0.25 percent. (AP) ■ China's Foreign Ministry has accused Japan's prime minister of hypocrisy and said he would not be welcome in China after he visited a shrine honoring Japan's war dead. (AP) ■ Secretary of State John Kerry will propose a framework for a final-status agreement between Israel and the Palestinians when he travels to the region this week. (AP) ■ Samsung says a 110-inch TV that has four times the resolution of standard high-definition TVs is going on sale for about $150,000 in South Korea. (AP) ■ Ford says retail sales have risen 15 percent through November of this year. The automaker says it expects to sell at least 2.4 million Ford-brand vehicles this year, enough to make it North America's top-selling brand. (AP) Local News ■ Mainland Affairs Council (MAC) Chairman Wang Yu-chi said Monday that if a meeting between ROC President Ma Ying-jeou and PRC President Xi Jinping is to take place, it must happen at an appropriate time and in an appropriate context. Given the current situation,only APEC is a suitable occasion for such a meeting and China will not consider any other possibilities for the time being, said Wang. (Taiwan News) ■ Taichung City Mayor Jason Hu has stirred up speculation with his comment that if he finds that he is trailing another KMT candidate in the polls prior to the upcoming primary, he will "let justice prevail" and withdraw from the race. (Taiwan News) ■ Six of the 14 restaurant chains currently in Wowprime’s lineup are scheduled to hike their prices on the eve of Chinese New Year on January 31 next year. The chains are Wang Steak, Tasty Steak, Tokiya, Chamonix, Gi Hokkaido Kelp Hot Pot and ikki New Japanese Cuisine. The increases are said to range from about 2.5% to 10% of current rates, with the greatest increase to come at Gi, where the basic rate will rise from NT$198 to NT$218. (Taiwan News) ■ The composite index of Taiwan's manufacturing sector continued to flash a "yellow-blue" light in November, showing economic recovery remains fragile despite slight improvement of industrial production index, export orders, and export/import trade figures, according to local think tank TIER. (Taiwan News) ■ Four well-known hospitality brands will start applying a food traceability system to their menus in early 2014, part of efforts to promote food safety following a year of food safety scandals and scares. The participating brands are five-star hotel W Taipei, 60-year-old Peng Yuan Restaurant, food conglomerate Wow-Prime Group's Hot-7 restaurant chain, and Mellow Fields Hotel. (CNA) ■ Worldwide shipments of light-emitting diode (LED) televisions will continue to grow in 2014 amid increasing popularity, according to a local market research firm. It said LED TVs will completely replace cold cathode fluorescent lamp (CCFL) sets in 2014, with LED TV shipments growing by an annual 3 percent to 209 million units. (CNA) ■ Trains on Taipei's metro will run 42 hours non-stop beginning 6 a.m. Tuesday, its busiest day of the year, when it will carry passengers to and from New Year's celebrations including world-famous fireworks at the landmark Taipei 101 skyscraper. (CNA) ■ Taiwan's central bank and Financial Supervisory Commission (FSC) on Monday warned the public of the high risk of Bitcoin, saying that investors will bear full responsibility for any losses themselves. (CNA) ■ While domestic airfare is set to take off by 2-10 percent starting Jan. 1, the Civil Aeronautics Administration (CAA) said Monday it has negotiated with air carriers to offer discounts that help offset the impact. More than 80 percent of existing flights will benefit from discounts. (CNA) ■ The Ministry of Economic Affairs does not have any plan to adjust electricity prices next year, Vice Economic Affairs Minister Duh Tyzz-jiun said Monday. (CNA) ■ The hourly minimum wage in Taiwan will be increased from the current NT$109 to NT$115 (US$3.84), starting next year, the Council of Labor Affairs announced Monday. (CNA)