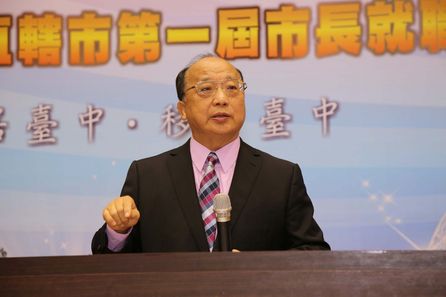 Taichung City Mayor Jason Hu has stirred up speculation with his comment that if he finds that he is trailing another KMT candidate in the polls prior to the upcoming primary, he will "let justice prevail” and withdraw from the race. Hu said that he will not be responsible for causing a split in the party and would rather withdraw than get involved in a hotly contested primary campaign..

Hu made his remarks to reporters after taking part in the opening ceremonies for the International Medical Service Center at Taichung Ching-chuan-kang Airport on Saturday. He said, "If there is a better person, I am willing to concede," arousing a good deal of speculation in local political circles and even causing some to wonder if he had fallen behind before the race was even underway.

Hu noted that projects now under development in Taichung City such as exclusive bus lanes and a light rail system to help relieve traffic woes will not be affected by what happens in upcoming primaries and elections. He said that construction projects and other plans are based on the needs of the people and have nothing to do with the timing of elections. The city’s decision to implement an 8-km free ride program on city buses was not made with an eye to elections, he said, it was simply the right thing to do and could not be delayed any more.