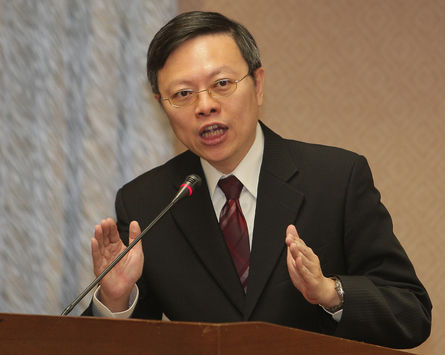 Mainland Affairs Council (MAC) Chairman Wang Yu-chi said Monday that if a meeting between ROC President Ma Ying-jeou and PRC President Xi Jinping is to take place, it must happen at an appropriate time and in an appropriate context. Given the current situation, said Wang, only APEC (Asia-Pacific Economic Cooperation) is a suitable occasion for such a meeting and China will not consider any other possibilities for the time being.

Wang also commented on suggestions from the media on how the leaders of the two respective sides of the Taiwan Strait might address each other if a meeting were indeed to take place. Wang could only say, “We are still looking into things like that.” Some outsiders have suggested the two simply use the informal “you” rather than referring to formal titles. On this point Wang responded, "Anyway, nothing is official yet, and we have no comment on that."

Wang is scheduled to visit China next year when he will meet Taiwan Affairs Office Director Zhang Zhijun, Wang emphasized Monday that the two sides are still in the early stages of talking about a meeting between the two leaders, and noted that a Ma-Xi meeting “will not be listed on the agenda for discussion" when he meets Zhang.

President Ma said in a recent interview with Yazhou Zhoukan, a Hong Kong-based newsweekly, that he would be interested in meeting Xi at the 2014 APEC meeting in Beijing next October.
Ma noted that APEC brings together economic leaders from nations throughout the Asia-Pacific region and that such a venue would mean less pressure on either side of the Taiwan Strait if he were to take part.

Representatives from Taiwan to the annual economic leaders meeting have included prominent businessmen at times, and this year’s meeting was attended by Vincent Siew, the ROC vice-president in Ma’s first term as president. Siew met Xi briefly at Xi’s hotel during the APEC meeting, with both Wang Yu-chi and Zhang Zhijun also present.

This is the first time that Ma has openly expressed a desire to attend APEC in specific terms. He also pointed out that were he to meet the Chinese leader in any other context, he would have to meet him as “President of the ROC” as opposed to “Chairman of the ruling KMT party.”