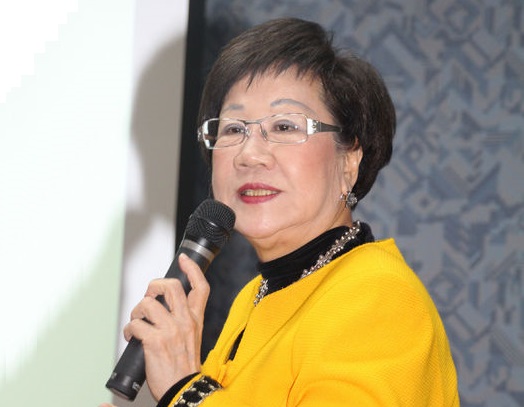 Former Vice President Annette Lu reiterated Sunday that Tiaoyutai belongs to Taiwan and advocated that all nations in the area should keep their military forces at least 12 nautical miles outside the islands in order to stabilize peace and security in the region.

In a speech at National Chung Cheng University forum on government and academic cooperation, Lu addressed the question of "Who Owns Tiaoyutai" and presented a "Tiaoyutai peace plan" as her solution to struggles over the small group of islets.

Lu noted that China’s recent declaration of an East China Sea Air Defense Identification Zone (ADIZ) has caused a great deal of concern among nations in the region. She added that students and business people do not often study or discuss such topics, and she wanted to take advantage of the opportunity to inform EMBA students and business leaders about the current situation.

Lu pointed out that "everyone says Tiaoyutai belongs to them" but her own research on Tiaoyutai shows that the islands originally belonged to Taiwan. She said that unfortunately Taiwan's voice is too small, and the nation needs to speak out louder to the international community.

Lu noted that President Ma Ying-jeou has offered what he calls the "East China Sea Peace Initiative," but Lu said she sees Ma’s initiative as little more than just slogans and no specific action, which can only expose Taiwan to even greater danger.

The former vice-president said that all military forces should be withdrawn and maintained at least 12 nautical miles from Tiaoyutai in order to stabilize peace and security in the region. Similarly, nations should refrain from making claims about sovereignty in the area in order to avoid disrupting the status quo.

Lu said that Japan, China and Taiwan should work together through the United Nations to develop Tiaoyutai into an international marine conservation area that will be exploited for peaceful purposes only.

On another front, Lu took to Facebook Sunday to needle the mayor of Taipei and a couple of possible candidates in the mayoral elections next year. Noting the latest controversy involving the city government – the growing scandal around the MeHAS development in Xiaobitan – Lu said that it will be hard for Ma Ying-jeou and Hau Lung-bin to avoid getting smeared in the mudslinging surrounding the news of the project. She asserted that as former and present mayors of the city they will probably have to take some responsibility for any misdeeds in the incident.

As for Wen-je Ko, identified as currently the most popular potential candidate in the Taipei mayor’s race in some polls, Lu said that Ko has never been elected to any public office and has not served as a city councilor. In addition, she asked, he has even had problems properly handling funding for his own research, so how does he expect to oversee the Taipei City Government with its more than 10,000 employees and a budget of NT$700 or 800 million?

Lu also pointed out that voters in Taipei and all over Taiwan are becoming leery of voting for "princelings" to govern their cities and their country. Lu mentioned that she had cleaned up Taoyuan County during her stint in office there some years back and that she would love to have the chance to clean up Taipei as well. She said that she is fully confident that she can handle the job, and looks forward to having a chance to take over the duties as mayor of Taipei.