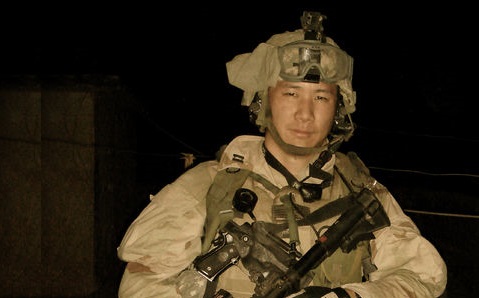 Taipei, Dec. 23 (CNA) Gene Yu, a nephew of President Ma Ying-jeou, disclosed for the first time Sunday that he went to southern Philippines four weeks ago to help rescue a Taiwanese woman who was "a family friend" kidnapped by terrorists while holidaying in Malaysia.
Yu, a retired Green Beret, said on his Facebook post that on Nov. 15, "my family friend, Evelyn (Ai-wei) Chang, was kidnapped by Abu Sayyaf terrorists at a Malaysian Borneo resort and taken to a jungle base camp in southern Philippines." "Her husband was shot to death during the abduction. I went to the Philippines alone on behalf of the family approximately four weeks ago and I finally brought her home safely yesterday," he said on the Sunday post.
"I will not be discussing any further details at this time about how I conducted this rescue as my priority currently is still to help the family manage the situation and to help Evelyn recover mentally from the extreme traumatic stress she was under while in captivity."
Yu said he was "just happy that we were able to bring her back to her home safely to her family and I will never forget the feeling when we touched down in (Taiwan) Taoyuan Airport and I knew she was finally safely back."
In his post, he also posted a photo of Chang smiling along with himself at Zamboanga Airport, just prior to leaving southern Philippines around 6 a.m. Saturday.
President Ma, during a visit to Hualien earlier Sunday, responded to a media query about his nephew's heroic act by simply smiling back at the reporters. Yu, 34, is the son of Ma's younger sister Ma Li-chun. He was present at a news conference held after Chang's safe return to Taipei Saturday, which marked an end to her 35-day hostage ordeal.
Yu, a former commanding officer of the United States Army Special Force, better known as Green Berets, was in Taipei to promote the Chinese version of his book "Yellow Green Beret" when Chang was abducted by armed gunmen from a villa on the resort island of Pom Pom off the East Malaysian state of Sabah Nov. 15. (By Sabine Cheng and S.C. Chang)