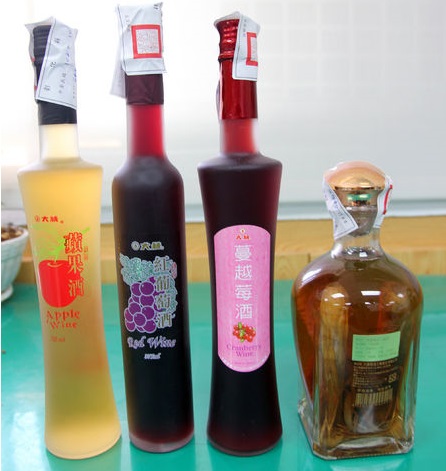 Tatung’s ginseng-flavored liquor fetches NT$800 a bottle, selling in a transparent glass bottle that boldly displays a fat ginseng root. Unfortunately the bright appearance of the wine has been sullied by an announcement from the Changhua County Government on Wednesday that samples of the product included ginseng flavorings that were long past their expiration date. Two products were found to have less alcohol content than what the label claimed, while a total of 12 violations were discovered among a number of products. The county government imposed a fine of NTS5.85 million on Tatung and has reported its findings to the Ministry of Finance and asked that the company’s liquor license be revoked.

Tatung supplies 12 different wines and liquors under several brand names, and Changhua County authorities have been carrying out a financial audit for several days, examining the manufacturing processes, raw materials and formulas for the company’s products. They found that 11 different varieties of cooking rice wine and fruit wines were all made up of alcohol doped with spices and fruit juice concentrate, with no distilling or brewing involved in the manufacturing process. The county health bureau has slapped a fine of NT$5.5 million on the company and sent samples of each product to the laboratories of the Taiwan Tobacco and Liquor Corporation for further testing.

Two university professors involved in the investigation told reporters that alcohol can be produced from sorghum at a cost of a little more than NT$40 for 600ml, which Chang Chi hops up with expired spices and retails for NT$260 in one particular instance. That’s a huge profit margin, and comments like that are cementing the reputation of Tatung and others in the current scandal as ‘black-heart’ operators who care little for the health of consumers.

In announcing the health bureau’s test results Wednesday, county fiscal director Chan Ming-jui said that the bureau had not inspected whether the methanol, ethanol, lead and sulfur dioxide contents of the products were in line with health standards. The tests did find that Tatung’s cranberry wine and ginseng wine were both mislabeled and imposed a fine of NT$100,000 for the ginseng liquor while noting that the mislabeling on the cranberry wine had been addressed in a previous test

The Department of Finance said that agents had traced the source of raw materials for the fast-selling ginseng wine with its transparent bottle and visible chunks of ginseng root presented a deceptively bright appearance which disguised the fact that artificial flavorings were added to enhance the flavor and aroma – using flavorings that were long past their expiration date. The firm’s cranberry wine and cider were also found to contain extra spices, and they had also expired some 10 months to a year and a half ago, earning the company a fine of NT$250,000.

Tsai Tsung-hsieng, Director of Toxicology at Changhua Christian Hospital, said the artificial flavorings consist mainly of esters which lose their effect by the time they reach their expiration date. In addition, long-term consumption of large amounts of the flavorings can cause liver damage, affect the metabolism of the body and, in the most serious cases, cause reproductive dysfunctions and lead to deformed fetuses.

After the outbreak of the Tatung case on October 16, the Changhua District Prosecutors Office immediately seized the company's assets to protect it against lawsuits. Chang Chi then used this as an excuse to refuse to offer compensation to any of its vendors. Prosecutors backed off a little on October 30, saying that as long as Chang Chi cooperates with pertinent authorities and proposes a specific, reasonable plan for compensation, the prosecution will release all or part of the seized bank accounts for refunds. On Wednesday the Changhua County Government also ordered company operators to submit a comprehensive "compensation plan" for wholesalers and retailers by no later than November 1.