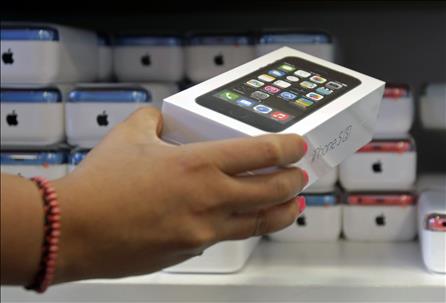 Taipei, Oct. 25 (CNA) Apple Inc.'s new pair of iconic iPhones -- iPhone 5S/5C -- went on sale in Taiwan Friday.
Sales began first at 9 a.m. at Studio A's flagship store in the Neo19 mall in Taipei's upscale Xinyi shopping disrict.
Customers who brought with them old iPhones, iPads and Mac computers were given discouts on purchases of either of the new iPhones.
The first 20 people who wore blue, green, yellow, pink or white outfits and purchased an iPhone 5C in the same color at the Neo19 outlet were presented with an exclusive Steve Jobs-style T-shirt.
Many iPhone 5S and iPhone 5C accessories were also available at special prices.
Studio A, the first Apple premium reseller in Taiwan, said its 23 other stores around Taiwan, including those at Dream Mall, Miramar, Breeze Center, Takashimaya and Tai Mall, opened at 10 a.m.
Though dozens of people lined up early in the morning outside many of the stores, hoping to get the first look at the new products, the enthuiasm seemed muted compared with past Apple product sales launches in Taipei, store operators said.
Apple is charging a little more for its newest flagship smartphone -- iPhone 5S -- than its older iPhone 5 series. The 16GB model of the iPhone 5S carries a price tag of NT$22,500 (US$765), the 32GB version costs NT$25,900 and the 64GB edition is selling for NT$29,500.
The less expensive plastic-backed iPhone 5C starts from NT$18,900 for a 16GB model and NT$22,500 for a 32GB model, according to Apple Taiwan. Taiwan's three largest telecom operators received about 150,000 orders for the iPhone 5S during the pre-order period, far exceeding the first deliveries of the phones to Taiwan, according to media reports.
As a result, local iPhone fans may face delays in getting their hands on the phones. (By Han Ting-ting and Sofia Wu)