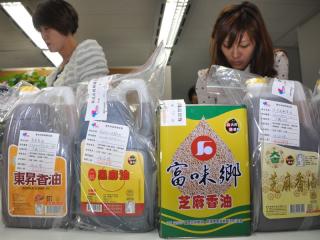 Officials of Full Flavor Foods have abandoned their claim that the company exported all of the cottonseed oil that it produced in its Changhua facilities, saying that the oil was added to at least two dozen of its food products. Confronted with evidence collected by the New Taipei City Health Bureau regarding Full Flavor’s import and export records, chairman Chen Wen-nan finally admitted Wednesday that the company had blended cottonseed oil into a total of 24 different products marketed in Taiwan, including one product labeled "blended peanut oil" which was nothing more than cottonseed oil with peanut flavoring. The New Taipei City Health Bureau immediately charged Full Flavor with violating the Food Sanitation Law, attempting to avoid inspection and misleading labeling, and imposed a total of NT$8 million in fines.

Asked just how many different domestically-sold products the cottonseed oil had found its way into, on Thursday morning health officials could only say, “A lot!" The exact numbers are still being totted up, and Health Bureau officials say that based on what Full Flavor personnel have said so far, the oil has been distributed through numerous channels including sales to groceries and wholesalers and on to stir-fry shops, snack bars and restaurants across Taiwan.

New Taipei City Health Bureau officials went to Full Flavor’s offices in Wu-ku Industrial Park on October 21 and demanded that the company turn over nearly three years of records for cottonseed oil. Full Flavor employees tried to stall the health bureau officials with excuses that there were too many records to sort through, but the bureau threatened to turn the matter over to the New Taipei City Prosecutors Office unless they surrendered the documents before noon Wednesday. At about 8pm Full Flavor Chairman Chen Wen-nan, accompanied by the General Manager and a lawyer, delivered the requested information to the Bureau of Health. The records showed a number of inconsistencies and Chen would only admit to adding cottonseed oil to a total of 24 products including black sesame oil and regular sesame oil.

In an October 21 report to the Health Bureau inspectors had said that over three years Full Flavor imported 5828.62 tons of cottonseed oil from Australia for refining at the Changhua plant for direct export to Singapore as well as mixing with other ingredients for export to Hong Kong and elsewhere. Total exports were listed as 3881 tons, with current inventory in the Fangyuan plant at Fangyuan at 1262 tons. The discrepancy of nearly 700 tons was attributed to losses during the refining process, and the report stated that fully refined cottonseed oil was all exported and "absolutely not distributed in-country."

Health Bureau inspectors checked customs declarations and found records for about 1851.53 tons of cottonseed oil. They also looked at purchasing records, production figures, mixing formulas, product labels, sales and other data that might shed more light on where the suspect oil went.

Late Wednesday night Full Flavor chairman Chen Wen-nan finally admitted that of the company 's 51 different oil products, 24 were extended with cottonseed oil and sold on the domestic market along with a blended peanut oil in which the ‘peanut’ component was nothing more than peanut flavoring, The Health Bureau immediately declared that the 25 products were all mislabeled, which according to the Food Sanitation Management Act calls for a fine of NT$200,000 per product, for a total of NT$5 million. In addition, the bureau imposed an additional fine of NT$3 million for attempting to avoid inspection and stating improper facts to health bureau officials. Finally. the case was referred to the New Taipei City Prosecutors Office for further investigation.