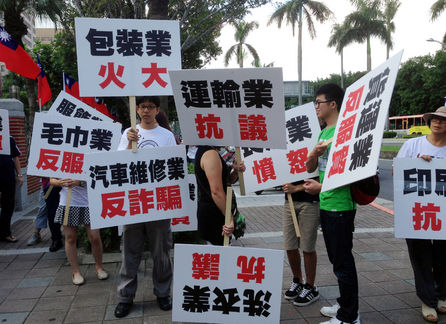 Cheng lee-chung鄭立中of China’s Taiwan Affairs Office said in a Taiwanese media interview earlier that the schedule for signing a cross-strait trade deal in goods may have to be postponed due to the extended deliberations holding up approval of the cross-strait agreement on services in Taiwan's Legislative Yuan.

The cross-strait agreement in goods had been expected to be signed by both sides by the end of this year, but officials of the Taiwan Affairs Office have grown increasingly pessimistic about the schedule.

Cheng noted that the agreement currently awaiting approval covers only 80 categories of products and services and cautioned that if the present agreement is held up any longer the many other agreements behind it will also be delayed. He added that much of the resistance being seen in Taiwan is due to unfounded fears.

He cited the beauty salon sector as example, saying the fear of being knocked out by an inflow of competitors from China is an overreaction. Cheng stressed that businessmen should focus on upgrading their services instead of worrying about competition, and urged them to take advantage of the huge market of 1.3 billion people in China. “Trade deals will benefit both sides, and we hope to see further business cooperation accordingly,” said Cheng.