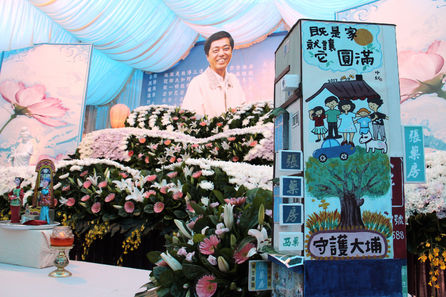 TAIPEI (Taiwan News) – An autopsy found that Dapu pharmacy owner Chang Sen-wen committed suicide, the Miaoli Prosecutors Office said Wednesday.
Chang, 60, was found dead in an irrigation canal near his home in the Dapu area of Chunan, Miaoli County, on September 18 after he had failed to return home from his regular morning walk. He had been depressed after the county government razed his pharmacy and three other homes in July to make way for a science park despite months of vehement protests.
According to the autopsy report by Ministry of Justice coroners, Chang’s body showed not a single external injury caused before his death while no legal or illegal drugs were found in his blood, prosecutors said. The report ascribed a minimal amount of alcohol in his blood to a normal reaction after death.
The investigation of the crime scene showed no signs of a fight or of the use of external force, prosecutors said. Chang must have been conscious before he landed in the canal, indicating suicide was the cause of death, according to the autopsy.
The pharmacist’s son, Chang Yuan-hao, said that there were still too many questions left after the autopsy, but that even if he couldn’t accept the document, he would still have no choice but to accept it.
Chang’s son woke up at 6 a.m. on the morning of September 18 and found him missing, though his wallet, cellphone and ID were still lying around at home. The son reported him to the police as missing around 10 a.m., media reports said. Surveillance cameras showed him leaving home at 2:10 a.m. carrying a shopping bag. A search party found him already dead in a creek under a bridge about 1 kilometer from the pharmacy around 2 p.m.
Chang was taken to the Shin Kong Wu Ho-su Memorial Hospital in Taipei in early July where he was diagnosed with a severe depression. He spent two weeks at the hospital before being allowed to return home, reports said.
Ever since, Chang had lived in a state of near complete depression and uneasy sleep, his son said. He woke up four to five times a night but never recovered from the demolition of the pharmacy, the son said.
The tearing down of the four houses on the orders of Miaoli County Magistrate Liu Cheng-hung gave rise to a nationwide social protest movement, with impromptu demonstrations popping up wherever President Ma Ying-jeou or other government leaders appeared.
At the start of the Dapu science park project in 2010, an elderly farm woman committed suicide by taking pesticides. When the news of Chang’s death became public, activists blamed Liu and the Ma Administration for having made another victim.
Liu initially tried to visit the Chang home to pay his respects, but the family refused to receive him and a protester hit him with a shoe. He stayed away from the funeral after the family made it clear he would not be welcome.
The Dapu issue has found wide support from students, farmers, human rights campaigners and numerous prominent figures from the world of arts, literature and movies.
Protesters have described relevant legislation as dating from the Martial Law era, with hardly any changes having been brought since. Decision-making on how land is taken away from citizens has remained in the hands of a small group, with democracy and human rights playing no role whatsoever, activists said.
Activists have also accused Liu of double standards, waging a brutal war against the four Dapu homeowners while keeping his own house safe from the development of a high-speed rail project. The issue has also embarrassed Vice President Wu Den-yih, who promised as premier three years ago that the homes would not be torn down.