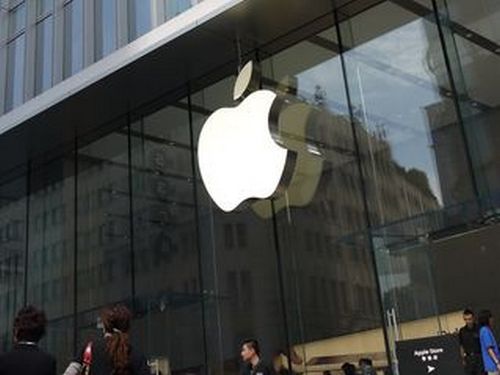 Taipei, Oct. 23 (CNA) Shares of local manufacturers in the Apple Inc. supply chain were mixed Wednesday morning as the U.S. consumer electronics giant's newly unveiled iPad tablet models failed to capture the imagination of the market, dealers said. Even those "Apple concept stocks" that rose in morning trading saw their gains limited by concerns over the stiff competition Apple faces in the global tablet market as rivals continue to introduce new models to seize a higher share, they said. As of 11:27 a.m., shares of Hon Hai Precision Industry Co., which assembles iPhones and iPads for Apple, had risen 0.13 percent to NT$75.60 (US$2.57), with 13.73 million shares changing hands. Shares of smartphone lens camera supplier Largan Precision Co. had gained 0.30 percent to NT$990.00. Shares of metal casing maker Catcher Technology Co. were flat at NT$169.00 and shares of battery producer Simplo Technology Co. had lost 1.36 percent to NT$145.00. The weighted index on the Taiwan Stock Exchange was down 0.25 percent at 8,396.84. "Judging from the performance of these Apple concept stocks, I think the new iPads failed to impress the market as the functions of the new products were widely expected," Ta Ching Securities analyst Andy Hsu said. "A fall in Apple's share price overnight after the iPad launch reflected that sentiment," Hsu said. Apple shares closed down 1.5 percent on Wall Street. Apple unveiled a new generation iPad called "iPad Air" -- so-named because it is 28 percent lighter and 20 percent thinner than its predecessor -- and the iPad mini 2, a smaller iPad. Both new tablets come with packed retina displays, but they did not have finger sensor technology, which the market had expected would be included. Apple said the iPad Air is equipped with the same A7 processor used in the company's newest iPhone 5S, which is expected to the new iPad 72 times faster than its predecessor. The new iPad and iPad mini are scheduled to go on sale in certain markets, including the U.S. and China, on Nov. 1. The Pad Air will have a starting price tag of US$499 and the iPad mini 2 will be priced at US$399 or higher, Apple said. "While demand for tablet computers remains solid in the world market, Apple has to compete with other international brands that have unveiled new models or will introduce new devices in the near future with more competitive pricing," Hsu said. "It remains to be seen whether the new iPad models will stir up significant buying interest, and in turn, boost shipments for its suppliers," Hsu said. Hsu said the performance of Hon Hai, Largan and Catcher Technology shares Wednesday morning reflected lackluster enthusiasm for the new iPads. "Their gains were limited this morning, pointing to cautious sentiment toward sales of the new Apple tablet computers," Hsu said. "Many investors are buying electronics stocks for trading purposes, and it is likely that their gains will be eroded tomorrow." Deutsche Securities forecast recently that Largan will see its consolidated sales in the fourth quarter rise 22 percent from the third quarter, but Hsu said he expected the sequential growth to range between 10 and 15 percent. (By Han Ting-ting and Frances Huang)