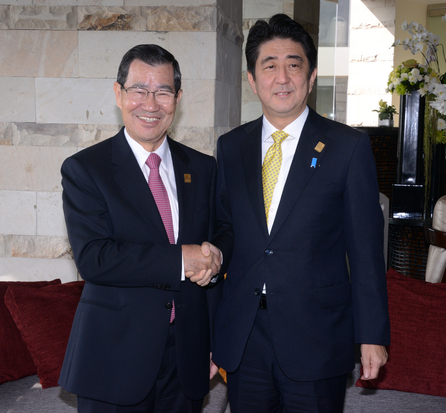 Taiwan hopes to sign five mostly trade-related agreements with Japan by the end of this year, paving the way for talks to start on a free trade arrangement, according to the Ministry of Foreign Affairs.
Su Chii-cherng, Deputy Director General of MOFA’s Department of East Asian and Pacific Affairs, told reporters Tuesday that the expected agreements and memoranda of understanding include pacts facilitating electronic commerce, cooperation on pharmaceutical regulations, railway cooperation and mutual recognition of patent priority claims.
Su said Japan prefers not to publicize the fifth one, which concerns air and maritime search and rescue. He did not explain the reasons for Japan’s reluctance to discuss the contents.
"Both sides have reached a consensus on these issues and are ready to seal the deals, pending the approval of the Executive Yuan and the best timing for the chairman of the Association of East Asian Relations and the chairman of Japan's Interchange Association," said Su.
Lee Chia-chin, Chairman of the Association of East Asian Relations, the quasi-official agency which handles the island's relations with Japan in the absence of diplomatic ties, said Tuesday that he expects the two sides to sign the agreements and MOUs at the beginning of next month.
In talks between Japanese Prime Minister Shinzo Abe and former Vice President Vincent Siew on the sidelines of the APEC summit in Bali on October 8, the two sides agreed to strengthen their economic partnership while enhancing cooperation in the area of disaster relief and prevention, officials of the two governments said then.
Siew, who attended the APEC summit in place of President Ma Ying-jeou, proposed that Taiwan and Japan, which signed an investment pact in 2011, also continue negotiations on other bilateral trade pacts.
Since Ma was first elected in 2008 the two sides have also inked an open skies deal, a fisheries arrangement, a mutual recognition agreement on telecommunications equipment, and MOUs on strengthening industrial cooperation, accelerating patent application processes and preventing money laundering.
Taiwan hopes that these pacts as well as others currently under negotiation will eventually lead to a full-fledged bilateral free trade agreement between the two nations.
Japan is Taiwan's second largest trading partner after China including Hong Kong, while Taiwan is Japan's fifth largest. Bilateral trade in 2011 totaled $73.9 billion.