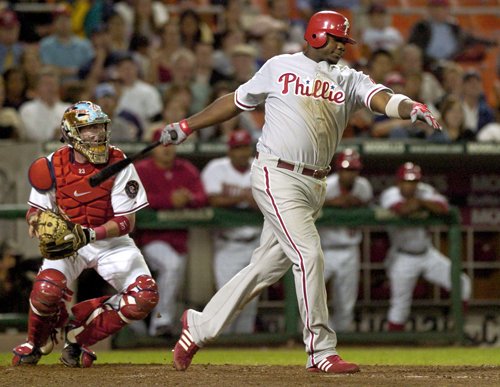 Charlie Manuel had fire in his eyes when he left the visitors' clubhouse on Tuesday night at RFK Stadium.
It looked like he could have throttled somebody.
He had his reasons. The first reason appeared to hit the right-field foul pole in the top of the second inning of Tuesday night's 4-3 loss to the Washington Nationals at RFK Stadium. The second reason stared a hole through him from the box score: an anemic 3-for-14 performance with runners in scoring position.
The critical loss dropped the Phillies one game behind the Los Angeles Dodgers in the National League wild-card race with just five games to play. That means the Phillies no longer control their destiny.
So when Manuel wakes up today, which will bother him more: the three-run home run that Chase Utley apparently hit in the second that was ruled a foul ball by first-base umpire Rob Drake, or his team's miserable performance in the clutch?
"Both," Manuel growled. "The same."
"We were lucky," Nationals manager Frank Robinson said afterward.
Apparently.
But Robinson wasn't referring to the alleged home run or the Phillies' missed chances. He was referring to the fact that the Nationals held Phillies first baseman Ryan Howard to a pair of singles and just one RBI. Howard flied out to left field with the tying run on first base with two outs in the ninth inning to end the game.
Some Phillies sat quietly in the clubhouse afterward and watched the Dodgers spank the Colorado Rockies at Coors Field. Others watched video of the controversial call.
The umpires would not comment after the game.
"It's not even close," Jimmy Rollins said, standing with teammates behind the video screen that appeared to show the ball hitting the foul pole square in the middle before kicking to the right.
But Utley never argued. Neither did first-base coach Marc Bombard. Neither did Manuel.
"I thought I saw it," Bombard said. "From what everybody has said, I guess I didn't."
Bombard spread his thumb and index finger a few inches apart. That's the signal he gave to Manuel in the dugout, indicating the ball was just foul. There is no view of the right-field corner from the part of the dugout where Manuel was standing. He learned a short time later that the ball apparently hit the pole.
But there were other reasons the Phillies lost. They had 10 hits against righthander Ramon Ortiz in the first five innings. Overall, they stranded 10 runners.
The Phillies still had a chance in the ninth. Chris Coste hit a leadoff double and scored on Utley's two-out single to left. That's when Howard stepped in.
Robinson visited the mound to speak with closer Chad Cordero. "You created this situation - get yourself out of it," Robinson said.
Cordero did. But the Phillies mostly got themselves out. They wasted a nice performance from Brett Myers. In seven innings, he allowed six hits and three runs.
"I've got one thing to say," Myers said. "I cost us the game."
Hardly. The offense did. Maybe the umpire's call did.
"Tomorrow is a new day," Utley said.
But the Phillies will wake up in need of some serious help.
Reds end Marlins' chase
Well, it was fun while it lasted. And it lasted a lot longer than anyone expected.
But with Tuesday's 5-3 loss to the Cincinnati Reds at a nearly vacant Dolphin Stadium, the Florida Marlins' quixotic chase of a National League playoff berth officially came to an end.
"It was an extremely hard day," manager Joe Girardi said.
But even though Girardi isn't one for moral victories, these young Marlins can claim those aplenty:
Despite a US$14.9 million payroll, the lowest in baseball in eight years, the Marlins stayed in their playoff race longer than the US$120 million Boston Red Sox stayed in theirs.
Despite the youngest lineup in the majors - one that, at times, was two years younger than that of the Philadelphia Phillies' Clearwater farm team - the Marlins staved off elimination a day longer than the defending World Series champion White Sox.
And despite regularly starting more rookies, six, than the San Francisco Giants, Arizona Diamondbacks and Atlanta Braves had on their Opening Day rosters, the Marlins outlasted them all in the wild-card race.
In other National League action: San Francisco 4, Arizona 2; Chicago 14, Milwaukee 6; St. Louis 5, San Diego 7; Pittsburg 4, Houston 7; Los Angeles 11, Colorado 4; Atlanta 12, New York 0.
In American League action: Minnesota 3, Kansas City 2; New York 5, Baltimore; Seattle 3, Oakland 12; Los Angeles 2, Texas 5; Detroit 4, Toronto 3; Boston 5, 1 Tampa Bay; Chicago 0, Cleveland 6.