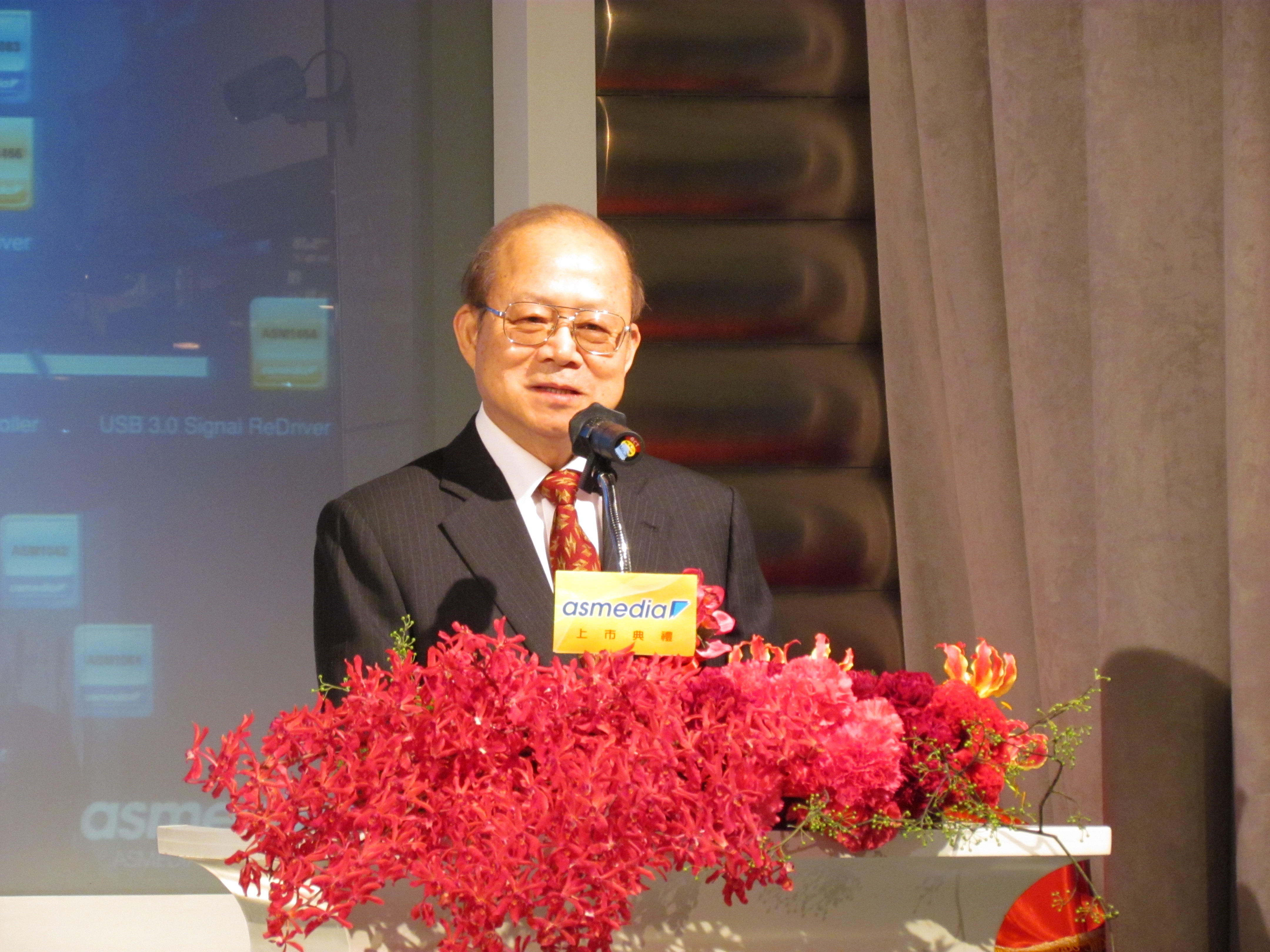 Schive Chi, who took office in September 2008 as Chairman of the Taiwan Stock Exchange, is now the second longest-serving person in that position since the 1990s after Li Chung-ying. Way back in 1993 Chi was plucked out of academia by then-Chairman of the Council on Economic Planning and Development Vincent Siew to be Vice-chairman of CEPD. The switch from a position as a professor in the School of Economics at National Taiwan University was abrupt, and the nearly 20 years that have passed since that time have gone by quickly for Chi.

During Chi’s seven years with CEPD he was almost single-handedly responsible for overseeing the negotiations that led to Taiwan's accession to the General Agreement on Trade and Services (GATS) of the World Trade Organization. He also served in the key position of Vice-chairman for International Trade and the Economy in the Economic Committee of the Asia-Pacific Economic Cooperation (APEC). When the DPP took over as the ruling party in 2000 Chi was transferred to the post of President of the Academy of Banking and Finance, then when the Ma government regained control for the KMT, he was appointed head of Taiwan’s financial market.

Chi’s extensive experience in international economic and trade negotiations made him a natural to take on responsibility for the financial and capital market with its inherent strengths and weaknesses in the face of the highly competitive international trade environment. Chi quickly determined that liberalization and open markets would be the most critical factors in nudging Taiwan's capital market towards internationalization. Thus he began thinking on a daily basis about how to bring the capital market in line with international standards and put Taipei and Taiwan on the road to becoming an Asia-Pacific financing center.

Always reaching out to do more

Asked about his efforts and achievements over the past few years, Chi suddenly becomes voluble and eloquent. He begins by admitting that even though the Stock Exchange is the primary driver of Taiwan's capital market, its position and role are not quite the same as similar institutions in other countries. The biggest difference, he says, is that Taiwan is still a highly regulated market. That prompts him to smile as he notes, "I didn’t find out until I got to the Stock Exchange that I couldn’t do half the things I wanted to do."

Even so, as he looks back at the four years he has spent watching over the market, Chi examines one by one the four goals he envisioned when he took on the task of heading the stock exchange.

Chi’s four goals included attracting companies from both inside and outside Taiwan to list on the TSE; development of warrants, a stock index fund and other products to expand the market size; the promotion of securities trading; and futures trading. In addition, he wanted to have the TSE listed in the British Financial Times' FTSE index. Getting onto the FTSE, said Chi, would promote Taiwan from its status as an "advanced emerging market” to a "developed market".

Chi admits frankly that little headway has been made on the latter two of these four goals, even despite real effort on the part of his colleagues at TSE. For example, promotion of the four aims was suddenly dropped by competent authorities for some reason, and the plan to upgrade Taiwan’s status in the FTSE market became mired down in the Central Bank’s reluctance to open up the market to pre-funding for foreign investors.

At this point, Chi switches over to talking about the first two of his four goals and suddenly becomes more optimistic and confident in his speech.

Going on to discuss efforts to encourage Taiwanese and foreign businesses to return to Taiwan and obtain a listing on the market, Chi notes that almost as soon as he started vigorously promoting Taiwan Depository Receipts. As a result, 31 foreign companies have issued TDRs in Taiwan since 2008. He has also overseen significant growth in listed F shares over the past three years, with 26 overseas Taiwanese and foreign companies coming to TSE to trade.

A closer look at foreign companies listed on the TSE shows a total of 57 as of the end of last year, 6.87% of all listed companies in Taiwan. Moreover, Chi points out that only five of the 57 listed companies were in the market when he took over the TSE – less than 1% of the total listings – so there has been significant growth in this area.

Chi adds that funds from Hong Kong, the Philippines and Singapore applied to TSE for listings during the last two months of 2012, as well as US and Japanese companies such as the Japanese-owned semiconductor technology company KST World.

Chi explains that market conditions in Taiwan’s capital market are quite good, featuring liquidity that is second only to South Korea in Asia. Moreover, information technology industry’s share of total market value has grown steadily since 1990 and currently stands at about 50 percent. Chi says this proves that the saying that Taiwan’s stock market is the “NASDAQ of Asia” is no exaggeration. He notes that the strength of the technology industry in Taiwan's capital market yields a clear cluster effect, in turn providing a big incentive for foreign technology industries to raise funds in the market. For several years prior to his appointment to TSE, Chi traveled frequently overseas to present positive impressions of the Taiwan market and persuade foreign companies to invest. He now sees his efforts gradually beginning to reap results.

Touching on the promotion of diversified products such as warrants and ETF, Chi pulls up digital data that shows that over the past few years, there has a certain level of growth, whether in the proportion, market share or transaction value of warrants, or the number and transaction value of ETFs. At the same time Chi admits that although some progress has been made, there is still a great deal of room for growth.

Chi takes a look at warrants, for example, pointing out that turnover in Taiwan is currently about 26% of turnover in the Hong Kong stock market. The warrant market in Taiwan has grown to over NT$200 billion, he notes, but still also only accounts for about 1% of overall volume.

Chi turns serious for a moment, noting that this is probably due to the fact that many systems and regulations in Taiwan are not compatible. For example, in Hong Kong most warrants trading comes from day trading, whereas substantial growth in warrants trading in Taiwan is difficult to achieve because of the high cost of hedging transactions.

Chi explains that domestic securities firms engaged in the warrant market are subject to a derivative transaction tax in hedging exchanges under current regulations, and there is a 0.3% stock transaction tax on stock deals for investment. Chi says this sort of transaction is not subject to tax in Hong Kong and that the relatively high transaction costs dampen the enthusiasm of brokers in the market, holding back growth in warrants trading. Chi adds that a similar situation exists in the ETF market in Taiwan.

Chi suggests that if the government cut the transaction tax to 0.1 percent the amount of transactions would increase by three times. TSE estimates that this would bring in 2.5 times more revenue for the public coffers in what would be a four-way win strategy for the government, the stock exchange, brokerage firms and investors.

Fortunately, the stock exchange has been actively informing and lobbying the government, and at the end of last year the FSC officially expressed hope that it would be able to reduce the hedge derivatives transactions tax. TSE believes that it has a very good chance of convincing the Ministry of Finance as well. If their efforts are successful, Chi is optimistic that there will be much more room for growth in the market this year for warrants and ETF.

Liberalization is the key to success in international competition

Chi is low-key in his pride over his efforts and achievements during the past four years, but does not dare be complacent about what remains ahead.

He offers his own unique insights into the relationship between finance and industry and the development of Taiwan's overall financial markets In the past, he says, scholars have maintained that "industry is the root and finance is a leaf." Today, however, says Chi, the current economic environment has turned the relationship between the two sectors completely around..

"If the economy is a tree,” he says, “finance is the root, industry is a leaf, and the system is like soil. A sound system means fertile soil that will yield a solid, healthy root, and then industry can absorb nutrients and continue to grow."

Even as he offers his views on the market and TSE, Chi repeatedly reveals his concern about future development in Taiwan's financial industry. He pulls up charts that illustrate how Taiwan's financial sector’s share of GDP has declined since 2000 while shares in Hong Kong and Singapore have continued to climb. That is a trend that has Chi very worried about the chances of developing Taiwan into an asset management center or financing hub in the Asia-Pacific region.

Chi notes the fundamental challenge faced by Taiwan's financial industry. He points out that although the government has taken steps since 2008 to adjust the economy, in particularly by moving away from bans on exchanges with China and steadily opening up the market, governing authorities still try to control and dominate the financial market, rather than approaching it with an open and competitive mentality. In Chi’s view, imposing too much control and protection in the face of a changing and competitive environment is not conducive to the economy. He says that only an open market can bring new opportunities.

Schive Chi is approaching the 20th anniversary of the day he left academia to enter the world of finance. Listening to him gush about one plan after another in the works, it is difficult to detect even a hint of slowing down, much less a stop sign. As long as this veteran of the financial wars is still on the battlefield, TSE will continue to flourish under his leadership, and Taiwan's economy will grow on the base of a solid and healthy root.