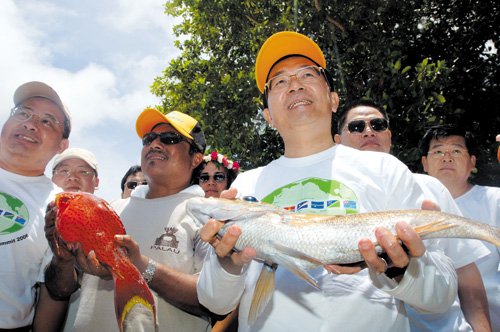 In the face of calls for his resignation, President Chen Shui-bian (陳水扁) yesterday urged the Taiwanese people to defend the hard-won democratic system and announced that his government would launch three major reform movements during the remainder of his second and last term.
"In the next 20 months, I want to do what we should do in 40 months and intensify the pace of reform along 'two roads,' namely to uphold Taiwan-centric consciousness and realize social equity and fairness," Chen said.
Chen made the remarks during an informal press conference at the Palau Royal Resort, the first full press conference the president has given in over three months.
The president said the Democratic Progressive Party government would continue to work to realize the four goals he outlined in advance of the Cabinet-sponsored conference on sustaining Taiwan's economic development in late July, namely to promote investment in Taiwan first, expand employment, reduce the gap between urban and rural life and shrink income inequality.
In addition, Chen vowed to launch "three movements," including using the name of "Taiwan" to enter the United Nations, hastening the birth of a new Taiwan constitution and promoting a referendum for a special law on the handling of party assets acquired by the former ruling KMT during the authoritarian period of its 55-year rule.
Addressing controversy
Chen's also made his first major statement to the press directly on the current controversies surrounding his office since issuing a "Report to the People" on June 20 to respond to a recall motion by the opposition Kuomintang and People First Party.
Most of the questions asked by reporters focused on the president's stance on calls for his resignation and allegations of malpractice regarding the use of state affair funds, alleged involvement in the Sogo Department Store management struggle and the indictment of his son-in-law on insider trading charges.
Chen expressed respect for the views of former DPP Chairman Shih Ming-teh, who will launch a sit-in campaign on September 9 that he said he would not cease until Chen stepped down.
"I have only respect for his views," Chen stated of the man whom he said "sacrificed so much for this land of Taiwan."
'Cutthroat political struggle'
But while the president indicated he would "humbly re-examine" his actions in the face of criticism, he argued that the drive to oust him from office was a "cutthroat political struggle" that was a side-effect of the March 2000 and March 2004 president elections, in which Chen defeated candidates of the former ruling Kuomintang twice.
"This is an obvious attempt to seize power that is wrapped in the banner of calling on me to take political and moral responsibility by resigning," the president declared.
Chen said that he would not shrink from any responsibility that he should shoulder, but added that "for me to assume responsibilities that are not mine is far from necessary, as I don't think I need to act as if I am morally better than others."
He contended that there was room for discussion about what political and moral responsibility implied, but stressed that "identity" or "respect" for the "legal institutionalization of democracy" was the core of genuine democracy. He said democracy must have the rule of law, "especially since the exercise of freedom of individuals cannot be extended to the degree that it infringes on the interests of others."
Chen related that Taiwan has gone through many hardships to end authoritarianism and has become a democracy and urged the people to "cherish this achievement" and "not allow democracy to be destroyed."
Chen also urged the media to pay less attention to his family members and allow them to have a "peaceful and low-profile life."
In addition to reaffirming that he and his family had not been involved in the Sogo management struggle, the president also stated that his office has been fully cooperative in the investigation of receipts for state affairs funds.
However, the president criticized the use of a "double standard" in relation to accusations of malpractice of the presidential office's use of state affairs funds and the lack of attention to the use of "special subsidy funds" by "other administrative officials," in an apparent reference to Taipei City Mayor and KMT Chairman Ma Ying-jeou (馬英九).
Regarding reports that Shih had called on the president to push for a cabinet or parliamentary system, Chen confirmed that Shih had urged him to back such a system and even believed that "if only I supported this call, it would be passed and realized."
Chen stated that he had "no prejudice for or against" a parliamentary system or a presidential system, but observed that he is "not so great" that his support would definitely ensure the realization of such a system.
Instead, the president strongly reaffirmed his position in his second inaugural speech of May 20, 2004 to "hasten the birth of a Taiwan constitution" that would fit the needs of the island's democracy.
While acknowledging that achieving a new "fitting, suitable and relevant Taiwan constitution" by the end of his term in May 2008 would certainly be a difficult mission, Chen declared that "there is nothing impossible under heaven."