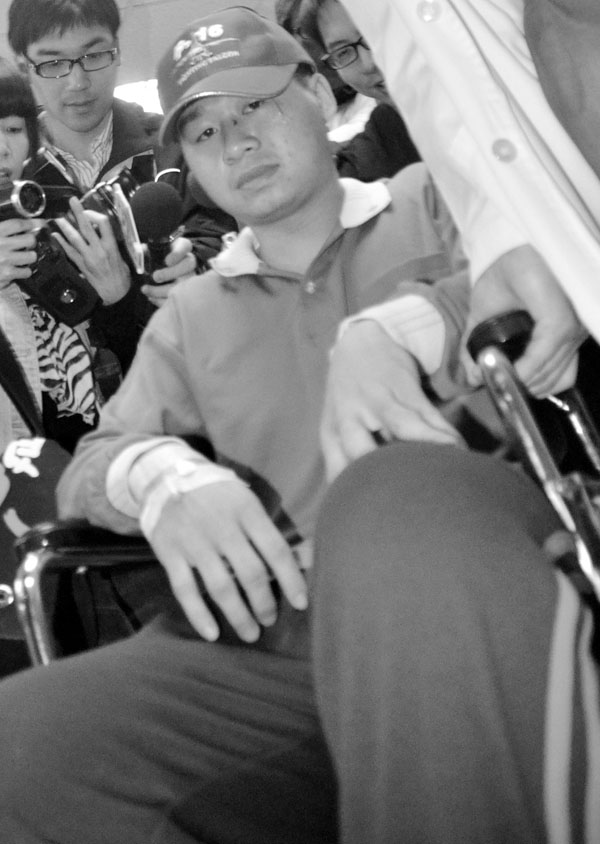 The soldier who was rescued from a helicopter crash was only lightly injured and was discharged from the hospital yesterday, but the other five crew members are still missing.
Tsai Yi-che, a medical sergeant who was on the S-70C-6 helicopter that fell into the sea off Taiwan’s southeastern coast while on a rescue mission, said he had a blurred memory of falling into the water and being pulled onto the vessel, according to Colonel Hsieh Mao-sung, an officer with the Air Force Command.
Tsai, the only person of the six on board the helicopter to be rescued so far, injured his left ankle during the ordeal but was otherwise in stable condition, Hsieh said.
The five others on board and the helicopter, which set out to rescue an Indonesian crew member on the fishing boat who was complaining of chest pains, still remain missing.
The helicopter spiraled downward rapidly about two nautical miles from the boat before falling into the sea, Hung Ching-an, captain of the fishing vessel Chia Yu Fa, told CNA by satellite telephone on Tuesday.
“I saw a light (of the helicopter) and wondered why it was so low. And I heard the sound of the propeller blades. Then it sank quickly and the lights went out,” said Hung, who was sailing his vessel back to a harbor in Pingtung County.
The helicopter’s pilot had talked to Hung prior to the crash to inform him of how the rescue operation would be conducted.
After the helicopter disappeared from the sea, Hung steered his boat to where the aircraft was last seen and he quickly saw some floating debris. The boat later found Tsai and threw him a lifesaving buoy twice before rescuing him, he said.
The helicopter took off from a base in Chiayi County at 6:42 p.m. on Monday and arrived in waters near the remote Orchid Island at 9:10 p.m. but it fell off the radar screen even before its mission began, the Air Force said.
The weather was fine at the time of the crash, and the helicopter had no record of major problems over the past year, the colonel said.
Despite the rough seas in the area, the conditions were still within an acceptable range for such a mission, added Hsiung Hou-chi, a major general at the base.
Still holding out hope of finding the five missing crew members, Hsieh said that they were all equipped with life-saving devices that could help them stay afloat and that the military planned to dispatch more helicopters and naval vessels to continue searching until 4 p.m.
The accident occurred off Taiwan’s southeastern coast in the Huatung Basin, which is characterized by unstable ocean currents and reaches depths of 4,000 meters, according to Hung Yi-shun, a Coast Guard officer based in Taitung.
Meanwhile, the Indonesian fishing boat crew member whom the ill-fated helicopter was sent to rescue was found to be healthy after getting a check-up at a Taitung hospital.