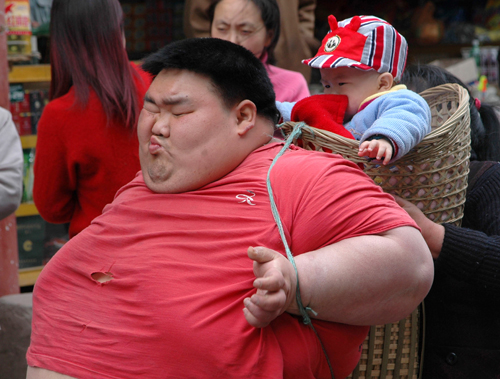 The world is in the grip of an obesity pandemic that threatens to overwhelm every country's health system with ailments such as diabetes and heart disease and shorten the life span of future generations, experts at an international conference warned yesterday.
"Obesity is an international scourge," Professor Paul Zimmet, the chairman of the meeting of more than 2,500 experts and health officials, told delegates in a speech opening the International Congress on Obesity. "This insidious, creeping pandemic of obesity is now engulfing the entire world."
"It's as big a threat as global warming and bird flu," said Zimmet, an Australian diabetes expert.
Other experts at the conference said the cost of treating health problems related to being overweight was immeasurable on a global scale, but was estimated at billions of dollars a year in countries such as Australia, Britain and the United States.
"We are not dealing with a scientific or medical problem, we're dealing with an enormous economic problem that, it is already accepted, is going to overwhelm every medical system in the world," said Professor Philip James, the chairman of a global task force set up by medical organizations that deal with weight-related problems.
He said governments are being forced to confront rising obesity rates because of the expense of treating related health issues.
Among the most worrying problems is skyrocketing rates of obesity among children, which makes them much more prone to chronic diseases as they grow older and could shave years off their lives, experts said.
The children in this generation may be the first in history to die before their parents because of health problems related to weight, Professor Kate Steinbeck, an expert in children's health at Sydney's Royal Prince Alfred Hospital, said in a statement.
The World Health Organization says more than 1 billion adults around the world are overweight and 300 million of them are obese, putting them at much higher risk of diabetes, heart problems, high blood pressure, stroke and some forms of cancer.
Zimmet said there are now more overweight people in the world than people who are undernourished, who number about 600 million.
People in wealthy countries are leading the world in overeating and not doing enough physical activity, but those in developing countries in Asia, Africa and Latin America are quickly learning the bad habits, delegates said.
But the traditional way of dealing with the issue - focusing on getting individuals to adjust their diet and exercise - has failed, and a more multifaceted response involving governments, business and community groups is needed, they said.
Experts also said governments should impose bans on junk food advertising aimed directly at children, although they acknowledged such restrictions were unlikely to come about soon because the food industry would lobby hard against them.
"There is going to be a political bun fight over this for some time, but of course we shouldn't advertise junk food to children that makes them fat," said Professor Boyd Swinburn, a member of the international task force.
Leaders of the International Association for the Study of Obesity, an umbrella group for medical organizations dealing with weight-related and children's health issues, yesterday approved backing such advertising bans as official policy, its president, Professor Claude Bouchard, announced.
One in four children in Australia is overweight or obese, said Steinbeck. Half of Australia's adult women are overweight, and two thirds of men. The rates were among the highest in the world, with the United States worse, she said, without giving figures for the U.S.
Modern life has created an environment that is counterproductive to staying a healthy weight, experts said, including neighborhoods that are increasingly being built with not enough public space for residents to exercise.
The conference will hear research and papers from almost 400 experts before wrapping up on Friday.