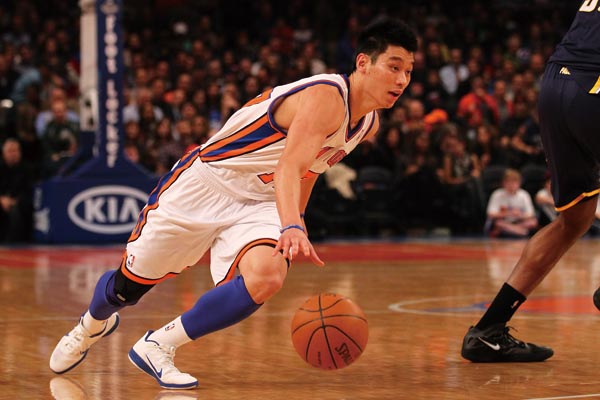 Mike Woodson’s offensive philosophies are different from Mike D’Antoni’s, but the Knicks’ interim coach said that doesn’t mean Jeremy Lin’s days as a starter are numbered.
Woodson met with Lin on Friday morning and told him not to worry about anything and to just continue playing.
“Right now, Jeremy Lin is our starting point guard and Baron is backing him up,” Woodson said. “That’s the way it’s going to be the rest of the season, pretty much, unless somebody gets hurt. I like that rotation. Jeremy is a big part of what we do. He’s our starting point guard. He and I are on the same page.”
Lin’s minutes and shots could decrease under Woodson, who took over for D’Antoni after he resigned Wednesday. Carmelo Anthony and Amar’e Stoudemire will be more of the focal points of the offense now.
Woodson will run more isolations and post-ups, both of which are Anthony’s strengths. But Woodson isn’t overhauling the offense and will continue to run some of D’Antoni’s system. Lin has thrived playing pick-and-roll basketball. He led the Knicks to nine wins in 11 games after joining the rotation.
Lin wasn’t sure how to answer when he was asked about a possible decreased role or whether he was worried about losing his starting job. Moments later, Woodson walked past him. Lin stopped talking to the media to confer with Woodson and asked if he could tell reporters that they had met and he would remain the starter.
“Absolutely,” Woodson said. “Say it that way, absolutely.”
So Lin did.
“Me and Coach talked,” he said. “He said that’s not going to change. He told me not to worry about anything, just play my game.”
Veteran Mike Bibby, who played for Woodson in Atlanta, said the Knicks’ new coach expects the point guard to get the ball to the scorers, make plays and hit shots. Woodson expressed that to Lin.
“He said continue to initiate the offense, be aggressive,” Lin said. “He said there’s going to be a lot of spacing and still the opportunity to play pick-and-roll. But at the same time, we’re going to utilize the post as well.”
“We’re not going to change a whole lot,” Woodson said. “Jeremy and Baron and our point guards, they’re going to still probe and run pick-and-rolls. I’m going to add a few other things, though.”
Woodson’s style should fit Anthony, the Knicks’ best post player, who wasn’t always effective in D’Antoni’s system. But Anthony said he expects Lin to do some of the same things he’s been doing and isn’t worried about the young point guard being affected by this.
“Lin is Lin,” he said. “Lin is about winning. Lin is about this team. Lin is about doing things to help this team win.
“As far as the Lin-sanity thing goes, it’s still there. That’s not going nowhere.”
-- See related story on Page 12