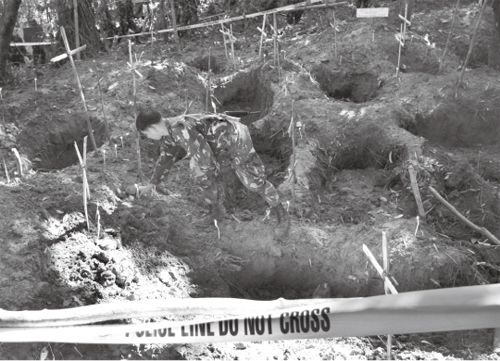 The head of the Philippine armed forces vowed Friday to file charges against Communist Party founder Jose Maria Sison and two others for allegedly ordering guerrillas to kill up to 300 suspected spies and government informants in the 1980s.
General Hermogones Esperon said the military, police and other agencies will file multiple murder charges against Sison and chief rebel negotiator Luis Jalandoni, both living in exile in the Netherlands, and opposition lawmaker Satur Ocampo.
Ocampo under suspicion
Ocampo, a former rebel negotiator, denied the allegation after officials reported Thursday that soldiers in the country's remote east found mass graves believed to hold the remains of up to 300 people allegedly killed by the rebels, who have waged an insurgency for 37 years.
Former New People's Army guerrillas and victims' relatives were willing to testify against the leaders, said regional army spokesman Major Felix Mangyao.
So far, troops and relatives have dug up at least 67 bodies in a hilly jungle near Inopacan town in Southern Leyte province, about 620 kilometers southeast of Manila, said military spokesman Lieutenant Colonel Bartolome Bacarro.
Strong emotions
He said the shallow graves could hold the remains up to 300 people, based on information from former rebels and victims' relatives.
Esperon was accompanied to the site by police forensic experts and victims' relatives, who wept as the remains were unearthed.
Skulls were placed beside graves marked by bamboo crucifixes and numbers. One villager, Domingo Eras, said he recognized the remains of his brother, who was abducted by the rebels. "I remember the clothes he wore," Eras told ABS-CBN television.
Another villager, Lilia Pepito, said she wanted to find the remains of three relatives, who were seized by the rebels. "Even if I just find their skulls or bones, at least I can (bury) something," she said, sobbing.
"Perhaps the words gruesome, animalistic, barbaric are not even enough to describe what you've seen," Esperon told ABS-CBN.
He told reporters on Friday: "Of course we are filing cases" against the rebels. "This kind of atrocity will make us more determined to finish the fight against the NPA and its front organizations."
Esperon said the military hoped to cut the number of rebels from 7,000 to 2,000 within four years. "An avalanche of developments will outrun them," he said.
Counter-accusations
Ocampo said he suspected the army may have announced the discovery of the graves to bolster claims that the rebels were behind numerous recent killings of left-wing activists.
Esperon was using "this discredited purge story to desperately conceal the military's role in extrajudicial killings and enforced disappearances of the president's critics," said a statement issued by Ocampo's office.
It said it was public knowledge that Ocampo and Sison were in prison at the time Esperon alleges the purges took place, while Jalandoni was in exile in the Netherlands.
Ocampo was jailed in 1976-85 and then escaped and rejoined the rebels. He was arrested again in 1989 and detained for several years.
Sison was detained in 1977-86. He left the Philippines in 1986 for a speaking engagement and has not returned. He sought asylum in the Netherlands in 1987 following the collapse of peace talks with the government.
The killings have been condemned by human rights groups and prompted President Gloria Macapagal Arroyo to order an investigation. Left-wing groups have blamed the military, which has denied involvement.
Leaders of the underground Communist Party and its armed wing have acknowledged that up to 900 suspected spies and government informers were killed in the southern Mindanao region during the 1980s. More than 60 others were killed in Quezon province and outlying areas southeast of Manila, according to people who survived the purges.
The guerrillas later acknowledged the killings as among the most horrible blunders in the insurgency.