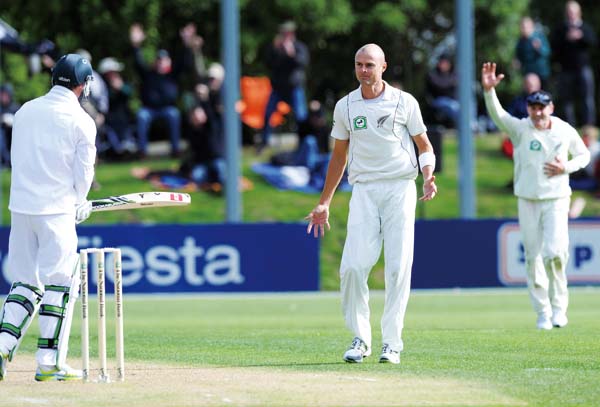 NEW ZEALAND
Chris Martin dismissed three of the world’s best players within four deliveries Wednesday to reassert his power over South African batsmen and to spark New Zealand’s sharp resurgence on the rain-affected first day of the first cricket test.
South Africa was 191 for seven at stumps on a day shortened to 59 overs, but the Proteas’ grip on the match had been loosened if not broken by Martin’s three-wicket burst spanning two overs immediately after tea. Jacques Rudolph was 46 not out, Vernon Philander 2 not out at stumps, but Martin’s 3-34 was the defining performance of the day.
South Africa had reached the first interval at 86-1 after skipper Graeme Smith made an unbeaten half century to impose himself on the opening session. But he was the first of Martin’s victims and his dismissal marked the turning point in the day’s play.
New Zealand won a toss delayed by rain and elected to bowl but had been given cause to regret the decision as Smith made 53 in gloomy and bitterly cold conditions.
Bright sunshine broke over the University Oval during the tea break and New Zealand emerged from the interval visibly enlivened. Martin removed Smith without addition to his score in the first over after the resumption, dismissed Jacques Kallis (0) two balls later and ousted A.B. de Villiers for a first-ball duck to flirt with the chance of a hattrick.
The veteran paceman, who had taken 0-15 in his opening spell, took 3-8 in a five-over spell to start the evening session and swing the initiative in the match.
“It doesn’t get much better than that,” the veteran paceman said.
In doing so, he re-emphasized an almost unnatural influence over South Africa’s best batsmen. Martin has now taken 47 wickets in 23 tests against the Proteas at an average of little more than 23. More significantly, he has dismissed Smith seven times — more than any other bowler currently active in tests — and has taken Kallis’ wicket six times, a rare success rate against one of the best allrounders ever in cricket.
“Especially after the way they started, the onus was on doing things a lot sharper and a lot more precise in that second session and I think we did that,” Martin said. “When the new batter came in we got the ball in the right areas.
“The pitch is just a slow wee nibbler at the moment so we’ve done okay.”
Martin said he mildly annoyed that coach John Wright called a team meeting during the interval, which cut into his warmup, “So I was a little bit fired up, a little bit more into it probably.”
Martin first cramped Smith, then beat him outside off stump and finally elicited a false stroke, tempting the South African to drive at a delivery well wide of off stumps which he lobbed from the toe of the bat to Rob Nicol at cover point.
Kallis came to the crease for his 256th innings in his 152nd test match, with more than 12,000 runs to his credit at an average of 57. Many of the 4,000 spectators that crowded the boundaries, enduring the rain and cold and the long wait for the start of play, had come to see Kallis bat.
He left them only six minutes and two balls later, without adding to his tally, when he was superbly caught by New Zealand captain Ross Taylor in Martin’s second over after tea. Taylor had to dive low and to his left to snare the ball as it passed him, out of the reach of South African-born wicketkeeper Kruger van Vyk.
Van Vyk, making his debut for New Zealand, attended the same high school in Pretoria as Rudolph and A.B. de Villiers, who came to the wicket after Kallis. The reunion was brief as de Villiers lasted one ball before he was struck on the pad by Martin and judged lbw by umpire Billy Doctrove.
De Villiers challenged the decision after a long hesitation and with reluctance and it was upheld under the decision review system.
Rudolph survived the hattrick ball which was angled into his hip and which he turned behind square for two runs, undeterred by four slips and two gullies. He then established a 66-run partnership with Amla which flourished as the sun retreated behind clouds.
Amla made 62, including stands of 52 with Smith and 66 with Rudolph, in a rebuilding effort before he was out cutting at Vettori and offering a simple top-edged catch to Taylor at slip.
South Africa had risked run outs several times in its innings against lively New Zealand fielding and was finally penalized when Mark Boucher was beaten by Doug Bracewell’s throw when he was four and it was 161-6.
Rudolph survived a decision review when he was 32 and South Africa 170-6. Replays showed he would have been out, but for Bracewell’s delivery being a no ball.
Luck went in New Zealand’s and Bracewell’s favor when Dale Steyn was out for 9 at 176-7. Steyn edged the ball from Bracewell to Martin Guptill, who couldn’t hold the catch but the ball passed through his hands to Taylor at third slip.
South Africa has won 20 of 35 tests against New Zealand since the teams first met in 1932, including six out of 14 in New Zealand. The New Zealanders have never won a test series against South Africa.