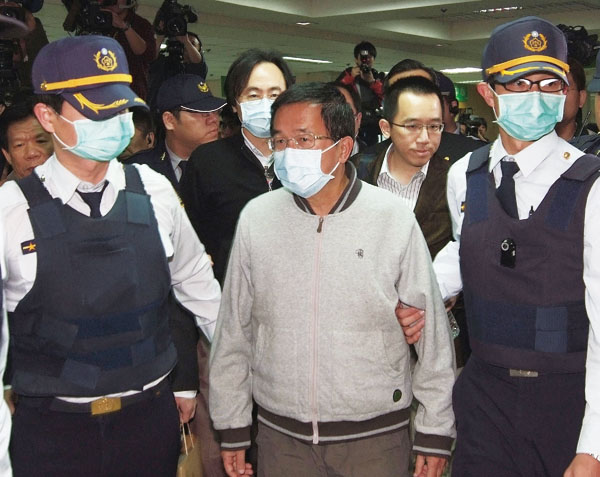 Former President Chen Shui-bian will have to stay in hospital for one week after cardiac surgery following a medical checkup, the Taoyuan Hospital said yesterday.
The announcement by a Democratic Progressive Party member of the Taoyuan County Council marked a major turnaround in his situation, since Chen had been expected to return to the Taipei Prison at 3 p.m. yesterday.
During the afternoon, DPP lawmaker Hsu Tain-tsair relayed comments by doctors to reporters that there was an urgent need for cardiac catheterization surgery because Chen was showing the symptoms of coronary syndrome.
Hospital vice president Hsu Ching-chih said the surgery would take place on Thursday and he would have to stay in hospital for observation for a week. The legislator also said that doctors had found a 1-cm growth in his prostate, though it was impossible to tell whether this was a sign of prostate cancer.
Chen is spending a 17-year sentence for corruption at the Taipei Prison in Kueishan, Taoyuan County. Prison officials said they would agree to the former head of state staying at the hospital after receiving an official request.
Visitors to the jail last week noted Chen looked unhealthy and uncomfortable. After an application to the Ministry of Justice, he received the go-ahead for a checkup outside the prison, though it took a meeting between Democratic Progressive Party lawmakers and Justice Minister Tseng Yung-fu to speed up the process and fix Wednesday as the date for the medical examination.
Chen left prison at 6:05 a.m. under police escort, reports said. Supporters of the former president had heated exchanges with security guards as he arrived at the hospital about twenty minutes later. He walked in surrounded by police officers and accompanied by his son Chen Chih-chung. Media reports noted he wore no handcuffs. His daughter Chen Hsing-yu and his mother later also joined him at the hospital after a train trip from Tainan.
The ex-president faced a range of checkups related to his digestive system, intestines, liver and heart. He was subjected to prostate and abdominal ultrasounds, a colonoscopy, an electrocardiogram and a thallium-201 SPECT imaging test during the morning, the hospital vice chairman said.
He added that the morning’s proceedings went smoothly and Chen’s relatives would be informed about his condition before his departure. A second SPECT imaging test was scheduled for the afternoon as well as eye tests, Hsu said.
Chen had been expected back in prison around 3 p.m. since he had not received permission to stay in hospital overnight, but his son said no time limit should be imposed on a medical checkup.
The former president’s wife, Wu Shu-jen, was not present. It was her visit to the prison last week which touched off the request for an outside medical checkup. She threatened to organize a protest against President Ma Ying-jeou if the prison refused the request. Chen’s relatives said he had been complaining about poor health for one month but the jail refused to take his problems seriously.