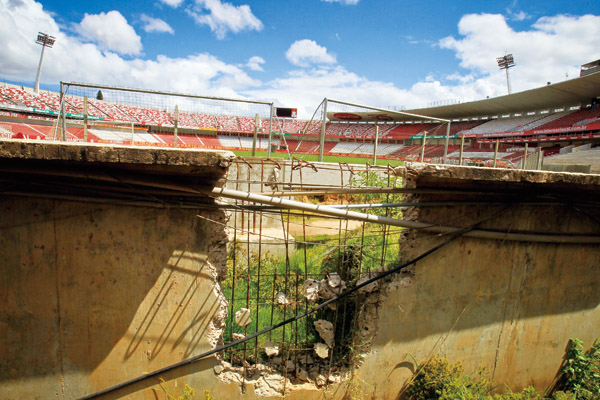 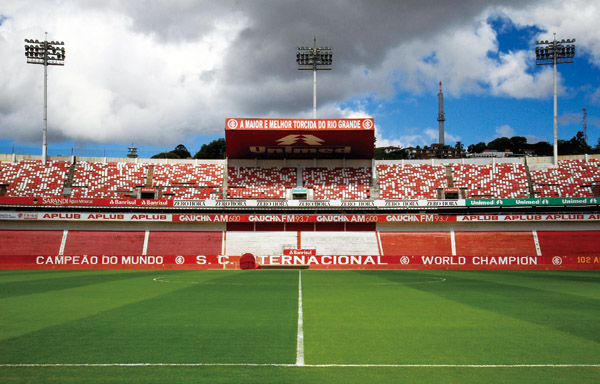 SAO PAULO
FIFA inspectors may have an unpleasant surprise when they visit Beira-Rio Stadium in Brazil next week, finding an empty construction site and a venue in danger of being dropped from the 2014 World Cup.
Lack of financial guarantees to renovate Beira-Rio halted work at the site eight months ago, and if the deadlock continues for much longer, the southern city of Porto Alegre may struggle to find a new venue with only two years left before football’s showcase event.
The construction company involved in the project said on Friday it believes it has found a solution to get the renovation work back on track, but it remains unclear when the plan will be put into practice.
If a contract is not signed soon between club Internacional and the Andrade Gutierrez company, FIFA and local organizers will have to quickly find an alternative to keep Porto Alegre as a tournament host.
Internacional rival Gremio is building a new arena in the city and it should be ready in time for the World Cup, but the venue would have to go through FIFA’s entire approval process from the start before being allowed to host matches.
Brazilian President Dilma Rousseff reportedly intervened to try to help on a deal to keep the Beira-Rio as a host, and Rio Grande do Sul state Governor Tarso Genro also got involved in the negotiations.
The problem come just as FIFA Secretary General Jerome Valcke said on Friday that he has serious concerns about Brazil’s World Cup preparations and that the country appears more concerned about winning the 2014 tournament than preparing for it.
He said “the big issue we have in Brazil is that not a lot is moving” and that he doesn’t understand why “the stadiums are not any more on schedule.”
A team of nearly 40 people from FIFA and the local organizing committee will visit six of the 12 host cities next week, including Porto Alegre, which will be inspected on Wednesday. Last year, the inspection team visited the six cities which will likely host Confederations Cup matches in 2013.
Internacional started renovating the stadium by itself, and in 2010 it reached a partnership with Andrade Gutierrez to have the project completed. The work stopped during the negotiations, and it will only restart after the partners give the required financial guarantees.
Andrade Gutierrez said the financial guarantees have not been completely secured yet, but the company said in its statement on Friday that it had already “identified the adequate financial mechanisms” to get needed funds.
It said it will soon release the date when the contract with Internacional will be signed to “assure the work will be executed in time for the stadium to host the 2014 World Cup matches.”
The Morumbi Stadium, one of Brazil’s most traditional, was dropped from the tournament in 2010 because FIFA said there were not enough financial guarantees for its renovation project. A new stadium is being built in the city to host the competition’s opening match in June 2014.
Internacional is one of Brazil’s most successful clubs. It has three national titles and won the Copa Libertadores twice. It defeated Barcelona to win FIFA’s Club World Cup in 2006.
Local organizers said the FIFA inspections next week will cover a variety of areas, including the infrastructure outside the venues.
“These inspections are aimed at analyzing and adapting the operational planning of the stadiums, which are extremely complex,” said local committee operational manager Tiago Paes.
He said the visit will cover areas dealing with traffic, security, fan management, commercial partners, marketing, hospitality, and setups for media.