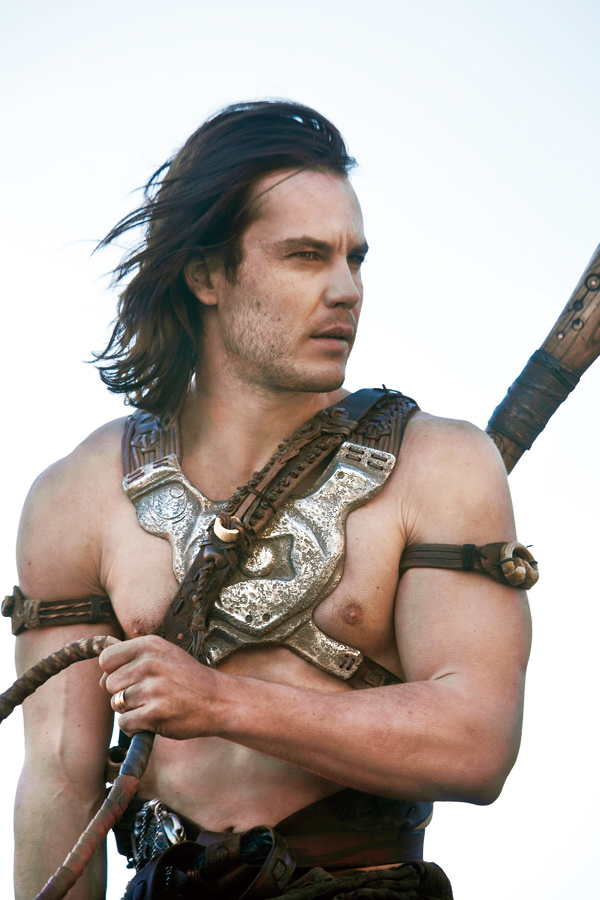 ORLANDO, Fla.
It’s all about to happen for Taylor Kitsch. The onetime model and supporting player on the TV version of “Friday Night Lights” finds himself starring in two of the biggest science fiction films of 2012.
Friday, Kitsch has the title role in “John Carter,” Disney’s big budget adaptation of the “John Carter of Mars” stories of Edgar Rice Burroughs.
And in May, he’s a headliner in Universal’s “Battleship.”
“You do your best to put yourself in the position to have something like this happen,” Kitsch says in the middle of a months-long grind of interviews and events publicizing the movies. “You just try and find a solid movie and get the role in the solid movie. I found two.”
Between the two movies and the two studios, that’s about $450 million Hollywood is gambling on the 30-year-old hunk. But Kitsch is gambling, too. He’s staking his breakout as a film star on two pricey movies that are being greeted, before they open, with a healthy dose of skepticism from the sci-fi faithful. Fangirl / fanboy nation is wondering if he’ll be the next Sam Worthingon (“Avatar”) or Chris Pine (“Star Trek”), or the next Garrett Hedlund (“Tron”). Will the movies be good enough to launch him?
“Starring in the biggest box office hit of all time (“Avatar”) didn’t exactly make Sam Worthington a household name. for instance,” says James O’Ehley, content editor for the popular SciFiMoviePage.com. Worthington made his mark in a “Terminator” movie, “Clash of the Titans” and “Avatar,” but has been hard-pressed to find success outside of the genre.
So Kitsch is embracing his new niche. Let others say “Acting is acting.” Kitsch knows that working in front of a green screen, with exotic settings, alien beasts and alien aircraft added by the effects team in post-production, is “a different animal.” He’s just one of the few to admit it.
“When you’re reacting to an ‘X’ marked way up on this huge green screen, and that’s supposed to be a Martian airship coming at you, it’s not quite the same thing as doing a love scene in a comedy,” he says. “You have to tap into that inner 7-year-old, using your imagination and how your 7-year-old self would react to seeing something that incredible.”
“You always have to trust your director not to make you look bad. There’s even more trust when what you’re acting with isn’t yet in the movie with you. They’re taking what you’re doing, the energy you put into the scene on camera, and applying the effects that they described to you, that they promised you would be there and be just as spectacular as your reaction says they are.”
“John Carter” has the native of British Columbia playing a Confederate veteran of the Civil War who finds himself on Mars in the middle of another civil war. He was prospecting for gold in the desert Southwest; now he’s on a dying-drying-desert planet with some of the same problems as the one he just left.
Burroughs “was way ahead of his time, and his science fiction had this big social element to it,” Kitsch says. “Unfortunately, a lot of these things he was talking about, subtle or not, from racism to religion to civil wars — we’re still talking about this stuff, wrestling with these conflicts, a hundred years later.”
Kitsch won’t say if he’ll be nervously watching the box office results on that film’s opening weekend, or if he’s worried that the first trailers for “Battleship,” which turns the popular board game into a naval confrontation with aliens, were greeted with laughter. And O’Ehley says the actor has little to worry about. “He has both good looks and talent and is sure to find future roles again even if they won’t necessarily be in multimillion-dollar blockbusters.”
Kitsch says that he’s “just trying to enjoy this ride. Everybody else is looking ahead — ‘Will there be a “John Carter 2” or “3,” will there be a “Battleship” sequel?’ I’m living in the now.”
He plays a pot grower in an Oliver Stone film (“Savages”) and may play a Navy SEAL in his “Battleship” director Peter Berg’s “Lone Survivor.”
“I’m proud of the whole arc of characters I’ve gotten to play these past few years, and getting to work with Benicio Del Toro and Oliver Stone (“Savages”}, to Peter Berg and Liam Neeson (“Battleship”), Willem Dafoe and Andrew Stanton 1/2“John Carter”3/4 — that’s quite a run.
“I plan to do something incredibly gritty next. I just hope it lacks green screen. I’ve had enough of that, for now.”