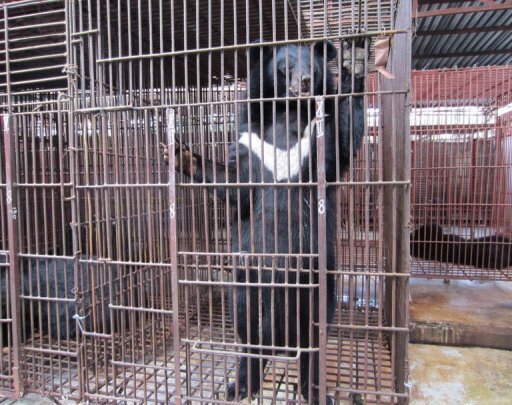 Seven Asiatic black bears kept as pets in small cages will be prepared for a return to the wild in Vietnam after their owner decided they were too big for captivity, an official said Monday.

The animals, also known as moon bears owing to the distinctive yellow crescent-shaped mark on their chests, were given to the Wildlife Rescue Centre in Cat Tien National Park in southern Vietnam.

"It will take us lots of time and effort to prepare them for the wild as they have got used to an environment with human beings around," Nguyen Van Cuong, an official from the centre, told AFP.

Cuong said it was too soon to say just how long it would be before the animals are ready to be released.

Asiatic or Himalayan black bears are classed as "vulnerable" on the International Union for Conservation of Nature's Red List, due to widespread illegal killing and trade in bear parts, coupled with a loss of habitat.

The animals, which had been kept as pets for seven years by a local entrepreneur in Dong Nai province, are all between eight and nine years old and weigh up to 300 kilograms (700 pounds), he said.

It is legal to keep bears as pets in Vietnam and the animals had lived in small cages for years. Cuong said the bears had not been used for bear bile production, which is banned but widespread in Vietnam.

In December, 14 Asiatic black bears were rescued from a bear bile farm in Vietnam after their owner decided to renounce the illegal trade.