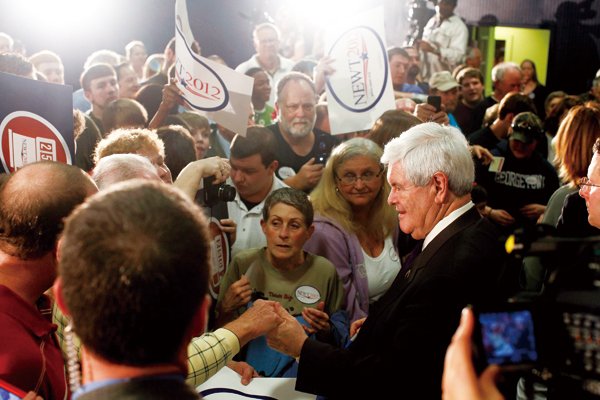 ATLANTA
With 10 states up for grabs Tuesday, Newt Gingrich has retreated to Fortress Georgia.
He is spending five crucial days in the state he long represented, and which until recently he regarded as a launch pad to a Super Tuesday sweep of the South, not a final redoubt.
Weeks ago, Gingrich confidently unveiled a comeback strategy in which he would win three Southern states Tuesday – Georgia, Tennessee and Oklahoma – and vie closely for delegates in Ohio.
But that was before a debate in Arizona last week that failed to reset the race in Gingrich’s favor, and before Mitt Romney and Rick Santorum’s close finish in Michigan on Tuesday reinforced the impression of a two-man race for the Republican nomination.
Santorum, whose conservatism appeals to many of the voters Gingrich must reach, is now the one who polls suggest may capture Tennessee and Oklahoma and arm-wrestle Romney for Ohio.
Gingrich conceded as much Thursday when he offered yet another path to a comeback. This one looked beyond Super Tuesday.
“Let me just be clear: I have to win Georgia, I think, to be credible in the race,” he said at a business breakfast here. “If I win Georgia, the following week we go to Alabama and Mississippi. I think I’ll win both of those. And we have a good opportunity to win Kansas.”
He seized on a glimmer of optimism in a Drudge Report item about him that blared “Lazarus rising again?!” It linked to a blog post about a Gallup daily tracking poll that showed Gingrich’s numbers rising by two percentage points on Wednesday. (But Thursday’s tracking poll showed him down a point. Variations of a point or two from one day to the next are not significant.)
Gingrich seems to be suffering from a cycle in which voters give candidates a close look and then move on, with the erosion of support feeding on itself.
“I think people figured out this is down to Santorum and Romney,” said Mike DeWine, the Ohio attorney general, who predicted Gingrich would not do well in that state. “Among the traditional Republican base,” said DeWine, who supports Santorum, “Rick has got a stronger message than Newt does.”
Santorum aimed a few arrows at Gingrich’s Georgia fortress Thursday, making two campaign stops in the state and seeming to taunt Gingrich when he said, “It’s Governor Romney and me, 1 and 2,”
But a sign of encouragement for Gingrich is another seven-figure contribution to a super PAC from his wealthy Las Vegas supporter, Sheldon Adelson.
The PAC is spending the windfall in Super Tuesday states, running commercials that depict Romney as out of touch with ordinary people and without core beliefs. “I looked at Mitt Romney’s record,” a woman says in one ad, “and I can’t figure out what he stands for. It changes.”
It is possible, however, that after months of televised attacks from Romney and Gingrich supporters, the ads have diminishing returns.
One place that appears to be true is Georgia, where attacks ads from Romney’s supporters seem not to have tarnished Gingrich much; his standing in recent polls has improved.
“We know just about everything about Newt that there is to know in Georgia,” said Sue Everhart,chairwoman of the Georgia Republican Party. “It’s like when you raise a child: You know all about him. I don’t think the attack ads are having an effect.”
Gingrich’s spokesman, R.C. Hammond, said the candidate was not writing off the other Super Tuesday states. Gingrich plans to visit Ohio on Saturday, and on Monday he will go to Tennessee, where a recent poll by Vanderbilt University had him in fourth place with 13 percent.
“The campaign has long known that the primary season is set up to go for a long time,” Hammond said. “You have to get to 1,144” delegates. “It’s not going to happen Wednesday morning.”
Since Monday, Gingrich has barnstormed around Georgia as if it were Iowa or New Hampshire – the only state in play on Tuesday.
He has greeted old friends from his decades of living in the state, though it has sometimes made for odd spectacles. As Romney and Santorum held election-night parties awaiting the returns in Michigan, Gingrich was in Carrollton, Ga., where he once taught college. He gave a rambling speech on national television in which he never mentioned the primaries in Arizona or Michigan, where he had run only token campaigns. Instead he told a long story about cutting down a tree as a young professor.
Gingrich is clearly well-liked in the state. “He’s got my vote,” said Janet Clayton, one of hundreds who applauded him at the business breakfast here. “If people will just wake up and look at what this country needs so desperately, it’s Newt.”
Even if Gingrich wins Georgia, which awards the largest number of Super Tuesday delegates, 76, his prediction of then rolling to victories a week later in Alabama and Mississippi is far from assured.
“I don’t put any stock in the fact that if someone wins this state, they win that state,” said Bill Armistead, the chairman of the Alabama Republican Party.
Citing a recent poll that had Gingrich and Santorum in a tie for the lead in Alabama, he said, “I believe it’s going to be very competitive.”
While Gingrich has been hunkering down, Santorum has been racing through Tennessee, Ohio, Washington state and Georgia. “We’re competing in every state, and we’re going to do well,” he told about 100 supporters who met him at a hangar at the Atlanta airport on Thursday.
He even co-opted Gingrich’s longtime argument that if the party nominates a moderate, Romney, it will lose the general election as it has with moderates in the past.
“This race is narrowing down, and we need the people of Georgia to stand with the conservatives to make sure the Washington establishment doesn’t again give us another moderate who will not motivate our country,” Santorum said.
He meant, of course, that he was the rightful alternative.