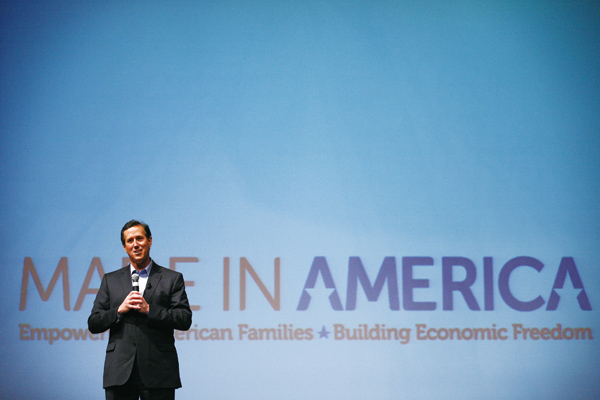 WASHINGTON
As he seeks the Republican nomination for the presidency, Rick Santorum has presented himself as a defender of the free market and opponent of bailouts for Wall Street and the auto industry, saying he has been consistent in putting his principles ahead of political pressures.
But as a congressman and then a senator from Pennsylvania, his record often defied those principles when it came to defending the interests of a political and economic powerhouse in his state: the steel industry.
Again and again, as Big Steel faced crippling competition from abroad during the 1990s and early 2000s, Santorum joined Democratic and Republican lawmakers from steel-producing states to seek special protection in Washington for the industry, including direct subsidies, trade tariffs and import quotas.
At the time, Santorum and other allies of the industry said that a flood of low-priced imports unfairly undercut U.S. steel producers and, in the process, threatened a sector that was vital to the nation’s economic security.
“It’s important to have a vibrant domestic source of steel,” he said in a 2001 interview with The New York Times. He added that allowing the steel industry to falter “would put this country on a path to overdependence, similar to oil, on foreign sources.”
But critics, including free-market advocates, said it was difficult to reconcile the policies Santorum pursued in Congress with the campaign-trail stance he has taken against government meddling in the marketplace.
“We did not think of him as a free trader when it came to steel,” said Lewis E. Leibowitz, counsel for the Consuming Industries Trade Action Coalition, a group of steel-purchasing companies that opposed the policies Santorum backed on the grounds that they would raise the cost of steel products for American consumers.
While it is hardly unusual for a senator to come to the aid of an employer back home, Santorum’s work on behalf of the steel industry is being raised in the election as he seeks to distinguish himself as the conservative alternative to Mitt Romney. Santorum’s campaign did not respond to several requests for comment.
His record became an issue last week during the Republican presidential debate in Arizona, when Romney, a former Massachusetts governor, criticized him for having voted in favor of a “bailout” for the steel industry.
Santorum benefited directly from the relationship he established with steel. In the course of his 16 years on Capitol Hill, he received nearly $350,000 in campaign donations from the steel industry, according to an analysis by the Center for Responsive Politics, a nonpartisan research organization.
Santorum’s strong support for steelmakers dates to his earliest days in the House, where he served from 1991 to 1995 representing a district outside Pittsburgh that had been hurt by the decline of the industry.
In November 1993, for example, he pushed the Clinton administration to back anti-dumping rules to protect the steel industry in return for his vote to approve landmark free trade legislation that the administration was trying to push through Congress.
But Santorum failed to convince the administration. “It got to where the White House was not returning our calls,” he told The Pittsburgh Post-Gazette. “I guess they feel they have the votes some other place.”
In the end, Santorum wound up voting against the North American Free Trade Agreement, which ultimately passed.
“You have to stare in the face of the folks you represent,” he said at the time, explaining his decision.
He pushed on other fronts, too, particularly with the Clinton administration’s refusal to pursue anti-dumping cases against foreign steel producers that the industry and its allies were demanding.
In June 1999, he was among a bipartisan group of lawmakers from steelmaking states who got behind a bill to impose tight quotas on foreign steel, even as the Clinton administration and its allies warned that the legislation would lead to protectionism.
After being approved in the House, the bill was defeated in the Senate.
Santorum appears to have taken a more prominent role in advocating on the industry’s behalf with the change from a Democratic administration to a Republican one in 2001.
In an interview, former Rep. Phil English, R-Pa., who once led the congressional steel caucus, said Santorum was a main figure within the group in advancing its cause with the new Bush White House.
The role fell to Santorum, he said, because he had good relationships within the White House. In particular, Santorum worked to persuade the Bush administration to impose tariffs on imported steel – a move that some Bush aides felt would undercut the president’s standing as a free trader.
In the end, President George W. Bush approved temporary tariffs in March 2002 on imported steel from certain countries, saying it would give domestic producers “breathing room,” even as critics accused him of trying to bolster his political standing in industrial states like Pennsylvania that he had failed to win in 2000.
English said the role Santorum played in lobbying the administration had often been overlooked by the very people who benefited. “He was on good terms with them,” he said, referring to Bush officials. “Senator Santorum was never given credit for this effort by the steel workers.”
But a year later, Mr. Santorum found himself on the opposite side of the Bush administration, which was attempting to repeal a law on tariffs imposed because of anti-dumping cases pursued by steelmakers and other industries. The law had diverted the tariff revenues from the Treasury to the industries, and many trading partners of the United States had decried it, saying that that it encouraged American industries to pursue the cases by rewarding them with a government subsidy.
But Santorum joined dozens of other senators, Republicans and Democrats alike, who sent a letter defending the law and urging the Bush administration to support it.