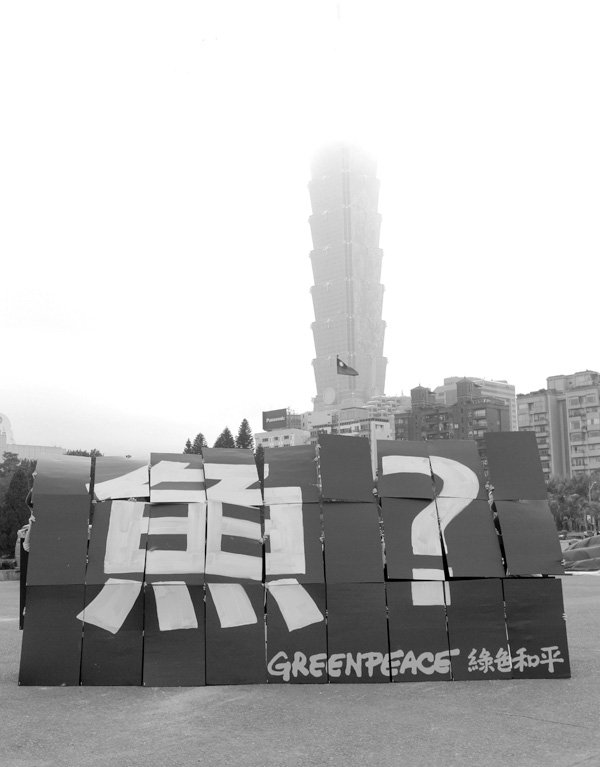 Greenpeace Taipei drew attention Saturday to its hot air balloon stunt, which marks the beginning of the group’s efforts to raise awareness of marine issues prior to the upcoming Western and Central Pacific Fisheries Commission (WCPFC) meeting.
“The hot air balloon is here to tell people of the urgent need for changes in the way we manage Pacific fisheries at this year’s meeting in Guam,” said Yen Ning, the group’s oceans campaigner.
Although the organization failed to release the balloon due to strong winds, the event drew a good deal of attention and many people said the setting at the National Sun Yat-sen Memorial Hall was quite impressive.
At the event, Yen accused the government of being lukewarm to appeals from environmental groups for more aggressive approaches toward oceans conservation.
Since Taiwan has one of the world’s largest and least regulated fishing fleets, she said, it should take more responsibility to protect the Pacific Commons which were being overfished.
Yen also urged the Fisheries Agency (FA) to advocate the closing off of other ocean areas and the establishment of conservation zones to protect endangered species of fish.
To continue building up awareness ahead of the meeting, she added, the organization’s ship MV Esperanza will arrive in southern Taiwan’s Kaohsiung Harbor on March 23, three days before the opening of the WCPFC meeting.
FA Deputy Director-General Tsay Tzu-Yaw said Friday that his agency was fully aware of the concerns of sustainable fishing and was prepared to discuss related issues with member countries “if the issue was brought up at the meeting.”