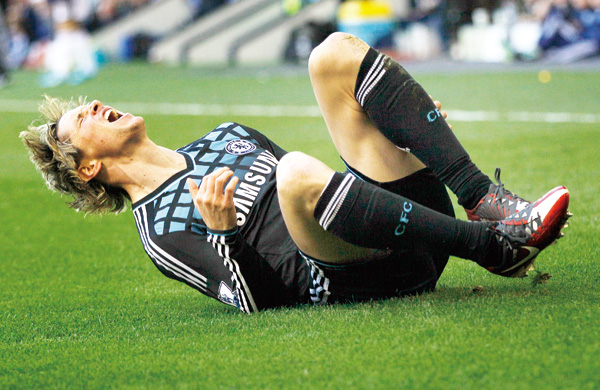 LONDON
Chelsea’s chances of qualifying for next season’s Champions League and Andre Villas-Boas’ hopes of keeping his job as coach were hit Saturday when the former Premier League champions lost 1-0 at West Bromwich Albion.
Gareth McAuley’s 82nd-minute goal — coupled with Arsenal’s dramatic 2-1 win at Liverpool — left Chelsea three points behind the crucial top four places in the Premier League and with a record of one win from its last seven away matches.
It was Chelsea’s first loss to West Brom since 1979.
“It was very poor in all senses of the word — in the first half and the second half,” Villas-Boas said. “We have to do much, much better.”
Robin van Persie scored his second goal in injury time to give Arsenal its comeback win at Anfield, while leader Manchester City kept control of the title race with a record-equaling 19th straight home win.
Mario Balotelli added to a first-half own-goal in a 2-0 win over Bolton, taking City 20 points clear of a Chelsea side in danger of missing out on the Champions League for the first time since Roman Abramovich bought the west London club in 2003.
Didier Drogba, Frank Lampard, Juan Mata and Daniel Sturridge all started for Chelsea but the Blues created little and West Brom could have scored before McAuley’s goal.
Liam Ridgewell drove Keith Andrews’ chip across the area and McAuley diverted the ball past goalkeeper Petr Cech.
“Everyone must do their job better: players, staff and manager,” Villas Boas said. “We have responsibility toward the fans of the club.”
Sixth-place Newcastle could now draw level with Chelsea on 46 points if it beats local rival Sunderland in one of three games Sunday.
Liverpool’s slim hopes of qualifying for the Champions League look to be over after Van Persie’s 30th and 31st goals of the season moved Arsenal to within just four points of third-place Tottenham and 10 ahead of the Reds.
Arsenal goalkeeper Wojciech Szczesny saved a penalty and rebound effort from Dirk Kuyt before Liverpool took a 23rd-minute lead through an own-goal by Laurent Koscielny. Van Persie headed in Bacary Sagna’s right-wing cross in the 31st and, in the third of eight minutes of injury time, shot past goalkeeper Jose Reina at the near post to end Liverpool’s unbeaten home record in the league.
The Gunners’ chances of a top-four finish could get another boost Sunday if Tottenham loses to defending champion Manchester United.
United needs victory to stay within two points of City at the top of the table and has not lost any of its last 25 meetings with Spurs.
Gael Clichy’s speculative long-range shot deflected off Gretar Rafn Steinsson to beat goalkeeper Adam Bogdan at the near post but Balotelli missed a string of chances before he made the game safe in the 69th.
Manager Roberto Mancini said he would not have selected Balotelli if he had read newspaper reports about the Italy striker breaking a curfew to enjoy a night out. Mancini said he had already decided upon his lineup, but added that he will speak to the player and likely fine him.
Bolton stayed next-to-last, only ahead of Wigan, which lost 2-0 to Swansea and two goals by Gylfi Sigurdsson. Everton drew 1-1 at Queens Park Rangers and Stoke beat Norwich 1-0.