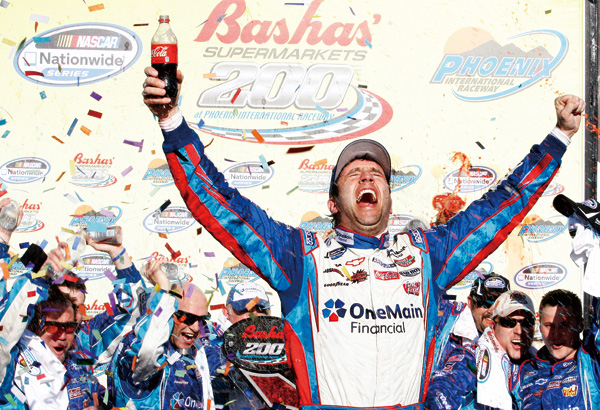 AVONDALE, Arizona
Mark Martin followed a solid run at the Daytona 500 by capturing the pole at Phoenix International Raceway on Saturday.
Martin finished 10th in Monday's fiery and foaming Daytona 500 and kept his roll going, capturing his 52nd career NASCAR pole with a top speed of 136.81 mph (220.16 kph).
Regan Smith was in line to earn his first career pole until Martin bettered his time late in the qualifying session. Defending series champion Tony Stewart also passed Smith on the final qualifying run of the day and will start up front with Martin in Sunday's 312-mile (502-kilometer) race around the oval.
Five-time NASCAR champion Jimmie Johnson, coming off a rough run at the Daytona 500, will start fourth, next to Smith on the second row.
Daytona 500 winner Matt Kenseth was 26th in qualifying.
The 53-year-old Martin has raced for seemingly every team on the circuit while winning 40 career races. He spent the past three seasons with Hendrick Motorsports, but changed teams in the offseason, joining Michael Waltrip for a partial season.
He wasn't great in qualifying at Daytona, but had a good run in one of the few races he hasn't won. He led two laps and finished in the top 10 after waiting out the two-hour delay caused by an inferno after Juan Pablo Montoya wrecked into a safety truck.
Martin has won twice at PIR — the last time in 2009 — and has 28 top-10 finishes.
"I think all of you know that I do work real hard at it, and I know that I have to work harder at it than guys that are 20 years younger than me," Martin said. "I'm willing to do that to be able to compete."
Stewart pulled out his third NASCAR title in the last race of 2011, edging Carl Edwards. He had a busy offseason, though, firing crew chief Darian Grubb a week after winning the title, then hiring Steve Addington from Penske Racing.
Stewart qualified third at Daytona with Addington at the helm and led two laps early in the race, but was never a factor while trying to end his 14-year winless streak in NASCAR's biggest race.
"It's what I would truly consider our first real weekend with Steve Addington as crew chief," Stewart said. "Daytona is always kind of a different deal, but this is where you first really get to start working on the handling of your car with your crew chief. I'm really proud of what we did yesterday and today."
Johnson had his run of five straight series titles end last season with his worst season in NASCAR, winning just one race and finishing sixth in the standings. He opened Daytona Speedweeks by having his car fail inspection on the first day and was knocked out of the Daytona 500 on the second lap when he was bumped by Elliott Sadler.
Johnson's month got even worse on Wednesday, when NASCAR announced crew chief Chad Knaus was fined $100,000 and, along with car chief Ron Malec, suspended for six races. Both were allowed to work with the No. 48 car at Phoenix after Hendrick Motorsports appealed the ruling.
Johnson also was docked 25 points, leaving him 70 behind Kenseth in the season standings. Johnson has been good at Phoenix, though, winning four races in 17 career starts.
I'm very proud of the lap," Johnson said. "The car has been great all weekend, and I look forward to tomorrow's race."
Smith went from first to third in a matter of minutes in Saturday's qualifying.
"Yeah, you get nervous," said Smith, who wrecked in both Phoenix races last season. "You want to get it. Poles mean something, they're stats. Nobody is going to remember we qualified third ... but we're happy to be starting up front."