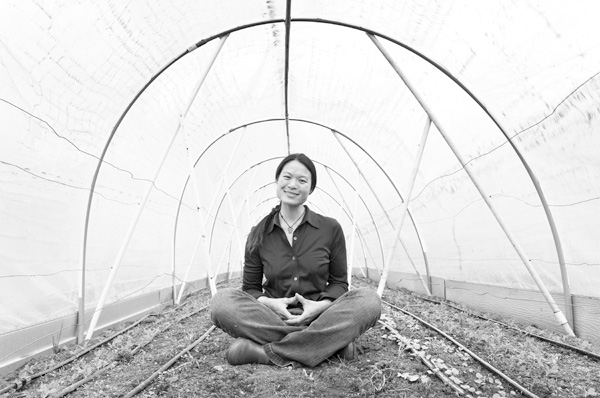 More than a century ago, many universities created extension departments expressly to help farmers improve their crops. Over the years, these departments have broadened, with farming still taught but sometimes overshadowed by classes covering every corner of the sciences and humanities.
Now more continuing education classes are returning to their agricultural origins, as people living in cities, towns and suburbs express interest in small-scale farming.
“We’ve offered classes on how to grow stuff since the beginning of time,” said Dennis Lukaszewski, urban agriculture program coordinator for Milwaukee County University of Wisconsin-Extension.
But in just the last few years, more beginning farmers with small plots of land have stepped into the mix. Just a few years ago, the Milwaukee campus began offering a beginning farming class in response to demand. That requires a different kind of lesson plan than one for a commercial farmer with hundreds of acres, or a family farmer who has been steeped in agricultural knowledge since birth.
Students in urban agriculture classes can range from seasoned gardeners looking to expand, to people seeking a wholesale career change to farming, Lukaszewski said. He gives better odds to those who hope to supplement their income while holding onto their day jobs.
As an income boost, small-scale gardening on at least an acre of land can work, he said. If you put in 20 hours a week, it’s possible to make $7,000 to $8,000 a year in the Milwaukee area, he said, with the added benefit of free food.
Trying to make it full time with a smaller plot is a harder proposition, he said. “Unless you’ve got equipment and reasonable acres and good markets, it’s going to be rough,” he said. Many people “just don’t realize the intensity and the amount of work,” he said.
In urban agriculture classes, students learn techniques to maximize their time and space, for example how to rotate crops through the seasons. With preference running high for organic produce, the university’s Organic Learning Center offers classes that cover proper methods of planting, fertilizing, composting and pest control.
Students of urban agriculture can learn fundamentals of entrepreneurship and marketing, including the ins and outs of farmers markets, the sales vehicle of choice for many small-scale operators.
Robert A. Kluson, an extension agent at the University of Florida in Sarasota, began teaching small-scale agriculture classes several years ago partly because the farmers markets in his area do not have enough vendors.
His classes in “market gardening” teach commercial production “on a scale larger than a home garden, yet small enough that many of the principles of gardening can be applied,” and they focus on local markets, according to the course description.
Kluson teaches a course for beginning farmers that is partly financed by the Agriculture Department. And he helped set up a program called Annie’s Project for women who want to be “agri-preneurs.”
Heightened interest in the local food movement, which encourages small-scale operators to offer fresh produce while supporting the local economy, has drawn students to these and other classes.
Kluson has taught classes to large-scale farmers; his market gardening classes are much different. You will not need a giant John Deere tractor to do your work, for one thing. For the small-scale farmer, he favors a walk-behind tractor with attachments.
He also helps his students confront zoning issues that are peculiar to city and suburban areas. “I want to make sure everyone knows what the regulations are so they don’t get fined” and perhaps work with officials to allow more farming in these areas, he said.
Kluson started a network of small farmers because he found that many of them fell prey to isolation. It works because “in small ag, everyone’s very generous with their information and their time.” Among larger farmers, “Everyone tends to think of their neighbor as their competitor,” he said.
The hope of finding a community of farmers is one reason Aluna Michelle decided to attend the seven-monthlong Growing Agripreneurs Program at Oregon State University in southwest Oregon.
Sponsored through a grant from the Oregon Department of Agriculture, the new program is for people who want to break into farming but have other careers, said Shaina Bronstein, facilitator for Oregon State’s small-farms program.
Michelle, 35, lives in Medford, Ore., and also runs an organic food gardening business. She has a bachelor’s degree in biology and a master’s in environmental science. Although she has previous farming experience, she took the Oregon program because “I wanted hands-on practical experience in farming in this particular location; farming here is new to me.” And she wanted to connect with other farmers in the area, known as the Rogue Valley.
Michelle farms three and a half acres in Medford along with a business partner. Vegetables in the ground include turnips, Napa cabbage, arugula, purple mustard, parsley, Brussels sprouts, cabbage, broccoli, Swiss chard, kale, peas, radishes, carrots and potatoes.
The Oregon State program, she said, “helped build the support and camaraderie that is so crucial to both our individual and shared success as farmers” in the area, she said, adding, “The connections that I made during the program have already grown in ways that support my farming and business ventures.”