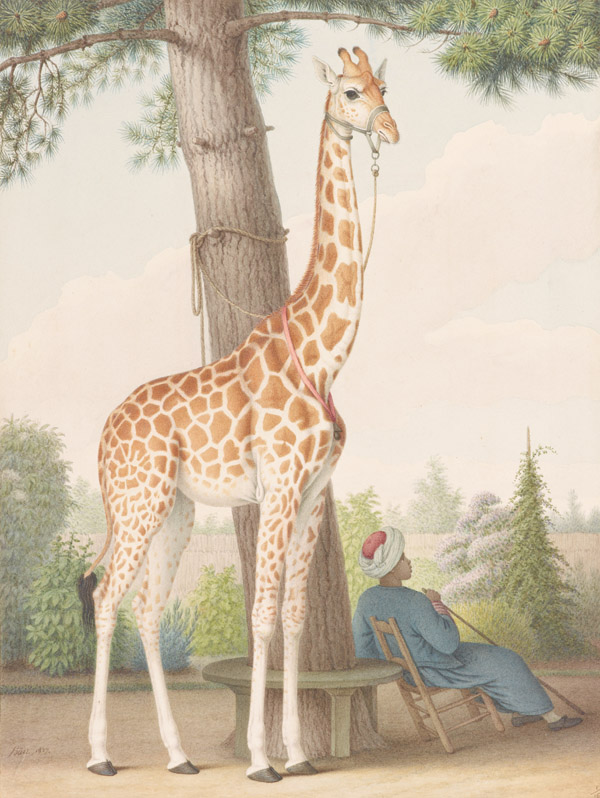 NEW YORK
When Odysseus, disguised as a beggar, returned home after 20 years of war and wandering, his aged dog, Argos, knew him instantly.
“Infested with ticks, half dead with neglect” and lacking the strength even to drag himself toward his master, Argos thumped his tail, nuzzled low and dropped his ears in grateful recognition. Then the “dark shadow of death closed down on Argos’ eyes.”
That is one of the encounters evoked at an enchanting exhibition at the Morgan Library & Museum that opened Friday. It was also one of the examples that an assistant curator at the Morgan, Clara Drummond, said inspired her to comb through the Morgan’s collection for other moments of recognition and interaction between animals and humans.
The show she created, “In the Company of Animals: Art, Literature, and Music at the Morgan,” is so literate and gracious that you don’t immediately realize just how startling its objects are and how haunting its theme is. And its range really is as wide as the Morgan’s collection, examining how artists, writers and composers “used animals to think and create.”
Here are drawings by Rubens and Delacroix; a watercolor of the famous 19th-century giraffe, Zarafa (who walked 550 miles, from Marseille to Paris); a Peanuts cartoon strip by Charles M. Schulz; a 19th-century children’s board game; a Mesopotamian cylindrical seal from the fourth millennium B.C.; scores by Haydn and Debussy; and a 15th-century image of the zodiac. And although the exhibition is roughly divided into categories – animals as muses, symbols, companions, talking creatures and moral teachers – notice is served from the start by a quote from Jorge Luis Borges: There is “no classification of the Universe that is not arbitrary and full of conjectures.” So, here too, all categories, we are assured, are “fluid.”
That particularly applies to the human and the animal. We cannot help seeing one as a reflection of the other. A female elephant named Hansken that had been taken to Amsterdam in 1637 was probably the one sketched here by Rembrandt, whose black chalk image rippled folds of flesh over the exotic creature. But the alert expression of the elephant’s eyes, as if startled by some sudden thought, could also have come from one of Rembrandt’s portraits; the elephant has glints of the human about her. Hansken, we read, may have even had some experience in impersonation: She was trained to dance in circles, fence with a sword and put on a hat and take it off.
Another kind of human sentiment – tender, melancholic, vulnerable – can be found in the eyes of a young rabbit in one of John James Audubon’s studies here. On the drawing’s verso, we are told, Audubon wrote that he created the work “during one of the days of deepest sorrow I have felt in my life.” That morning, his daughter-in-law Eliza had died.
This projection of the human into the animal – or is it more a discovery? – becomes more apparent in talking animals who are, as the text points outs, “creatures in the original sense of the word, marvelous creations of the human imagination.” This includes Nick Bottom from “A Midsummer Night’s Dream,” who was magically given a donkey’s head; he is shown here in a charcoal image by Odilon Redon.

In the case of Babar (the subject of a previous Morgan exhibition) or Winnie-the-Pooh, the combination of human character and animal body evokes the state of childhood, where aspects of both worlds merge with bewildering, shape-shifting ease. There is a charming drawing here by E.H. Shepard, the English illustrator of “Winnie-the-Pooh” and “Wind in the Willows,” sent in tribute to the U.S. actress Ruth Draper after a 1949 performance. Pooh leads his fellow creatures (including Eeyore, Toad and Badger) to the actress’ door with a declaration of “admirashun.” Could such a delegation’s sincerity ever be in doubt?

Sometimes, in such images, we read innocence into the animal world, almost as if we were glimpsing creatures cavorting in Eden before the Fall. Except that these simulacra of animal-like childhood also show just how far from paradise we really are. Schulz’s Snoopy may be a dog, but he is often the most knowing of the comic strip’s characters and is seen here on his doghouse roof with a typewriter, working on his novel. (Each draft begins with the words, “It was a dark and stormy night ...” which, we are informed, were “taken from Edward Bulwer-Lytton’s 1830 novel ‘Paul Clifford.”’)

The show will not permit us simply to embrace a Romantic, pastoral landscape full of peaceful creatures far more natural than venal humanity. That fantasy is now generally left for the terrain of human infants, whose cribs are lined with stuffed animals. More often, here, we find the opposite. Animals are partly seen as human because they reflect us at our worst.

We even glimpse the moment of transformation from innocent into more fearsome animal life in Duerer’s famous 1504 engraving “Adam and Eve.” Just as Eve is accepting the forbidden fruit from the serpent, in the distance an ibex stands perched on another kind of precipice. And at Eve’s feet are animals representing humors and temperaments, now doomed to be forever off kilter: the elk (“melancholic gloom”); the rabbit (“sanguine sensuality”); the cat (“choleric cruelty”); and the ox (“phlegmatic sluggishness”).

A similar allegorical spirit is evident in a 19th-century playing board called British and Foreign Animals: A New Game, Moral, Instructive and Amusing. It has no words, just pictures of animals on which the player lands. The board declares it is “designed to allure the minds of youth to an acquaintance with the wonders of nature.”

But such wonders are clearly representations of the human. The game board begins with the lowly jackal and ends with the regal lion: an evolutionary progress of sorts. Land on the horse and you get to “spin again, for a ride on one of these noble animals.” Land on the jackal and you face disgrace: Such creatures “follow armies, in hopes of being furnished with a banquet by disease or battle.”

This is also the language of fables. “Sly as a fox,” “gentle as a lamb,” “hungry like a wolf,” the exhibition points out, are phrases showing how often we “interpret animal behavior in human terms” and “draw moral conclusions.” The earliest-known version of the life and fables of Aesop is displayed here: a 10th- or 11th-century manuscript from Italy.

Often, too, such fables are dark. We see a first edition of Orwell’s “Animal Farm” with the original subtitle, “A Fairy Story.” Its portrait of what the author called “the progress of the Russian Soviets and their two dictators” would have been found less offensive, he wrote, “if the predominant caste in the fable were not pigs.”

But animal archetypes are not arbitrary; fables can become ludicrous if they mismatch temperament and creature. A letter from Edgar Allan Poe that specified revisions to his poem “The Raven” is accompanied by a panel informing us that initially, in thinking of an animal “capable of speech” for his poem (“Nevermore!”), Poe considered using a parrot.

So animals as humans? Humans with animal failings? Nature as brutish and as pastoral? Aspects of all of these come together in the peculiarly human preoccupation with pets, which probably would not be as intense if it weren’t for the mixture of fear and recognition, selfishness and devotion in the relationship.

In 1843 Elizabeth Barrett Browning’s dog Flush (to whom she wrote a near-love poem) was abducted and held for ransom. She writes of his return: “Oh, and if you had seen him, when he came home & threw himself into my arms ... in that dumb inarticulate ecstasy which is so affecting.” A cynic about such ecstasy might respond with another example here: the 18th-century British statesman Horace Walpole, who, it is pointed out, may have “felt more affection for his pets than for many of his friends.”

His cat Selima, spotting a goldfish in a Chinese porcelain tub, reached down to catch it and drowned. Thomas Gray wrote an elegiac tribute in a 1757 manuscript on display, “On the Death of a Favourite Cat, Drown’d in a China-Tub of Gold-Fishes.” Gray even provided a moral:

Not all that tempts your wandering eyes

And heedless hearts, is lawful prize;

Nor all that glisters gold.

But much here is, elegantly providing insight and pleasure. And we see, in its fine print, that the show has practiced what it preached, embodying what it displays.

“The exhibition,” we read, “is supported by a generous gift from Tina Santi Flaherty in honor of her faithful companions Jackie, a white Labrador retriever, and Scarlett, a King Charles spaniel.”